Market Square. This noon lunchtime gathering offers Downtown office workers a chance to root for the Penguins. It'll be hosted by Phil Bourque and legendary Pens broadcaster Mike Lange. We wouldn't be totally surprised to see a certain Boy Mayor put in an appearance as well.

CONSOL Energy Center. Can't go another 48 hours without a fix of live hockey? At 3 p.m., the Pens' home ice features a college match-up -- Robert Morris University versus the Rhode Island Institute of Technology -- followed by an AHL match-up between two minor Pennsylvania towns: Hershey and Wilkes-Barre Scranton. One ticket ($20/$25/$30) gets you into both games.)

Spectator Plaza (or, as we locals call it, Art Rooney Way and General Robinson Street on the North Side): Free hockey-themed attractions for fans include hockey-themed giveaways, interactive exhibits, a chance to measure the speed of your slap shot, and other activities. Events last all day from 8:30 a.m. to 5 p.m., and on Sunday from 9 a.m. to 1 p.m.

Downtown Pittsburgh First Night Pittsburgh, the city's New Year's Eve celebration, is family-friendly and alcohol-free. Which defeats the purpose for some of us. But for the rest, an $8 button ($10 the night of the event, available online or at select locations) grants access to a slew of musical performances, kid-friendly activities like puppet-making, and cultural attractions including martial-arts demonstrations. Keep a special eye out for Squonk Opera and Cello Fury -- out-of-towners will find nothing like them back home -- but be advised that some events require picking up free vouchers in advance. And it all ends in the best Pittsburgh fashion: with a massive fireworks display, starting at 11:45 p.m. For schedules, information on vouchers and picking up buttons, and other info, see firstnightpgh.com. 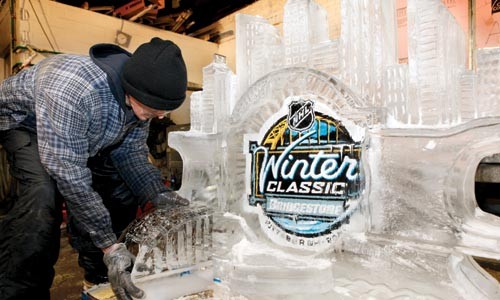 Heather Mull
Playing it Cool: In the ice-sculpting room of Mastro Ice, on Herron Avenue in the Hill District, Kevin Heist, 40, of Chippewa, puts the finishing touches on a 500-pound NHL Winter Classic ice sculpture. The sculpture will be installed at Heinz Field on Saturday, and Mastro Ice will be producing numerous other sculptures - including an 8-by-4-foot Zamboni machine - which will be on display throughout the day.

Heinz Field. The 2011 Bridgestone Winter Classic -- the sporting event that promises to be so spectacular that they named a whole tire company after it. Or something. (Tickets are sold out, but if you're like us, you may find it easier to watch it on TV while nursing a hangover anyway.) But depending on weather conditions, the 1 p.m. puck-drop could be delayed to 7 p.m. ... or pushed back to Sun., Jan. 2. And as this issue goes to press, temperatures for the Winter Classic are predicted to reach the mid-40s -- with rain. Welcome to Pittsburgh!