The all-black cast is a refreshing change from the Candace Cameron-Bures and Lacey Chaberts that typically fill holiday TV movie screens. 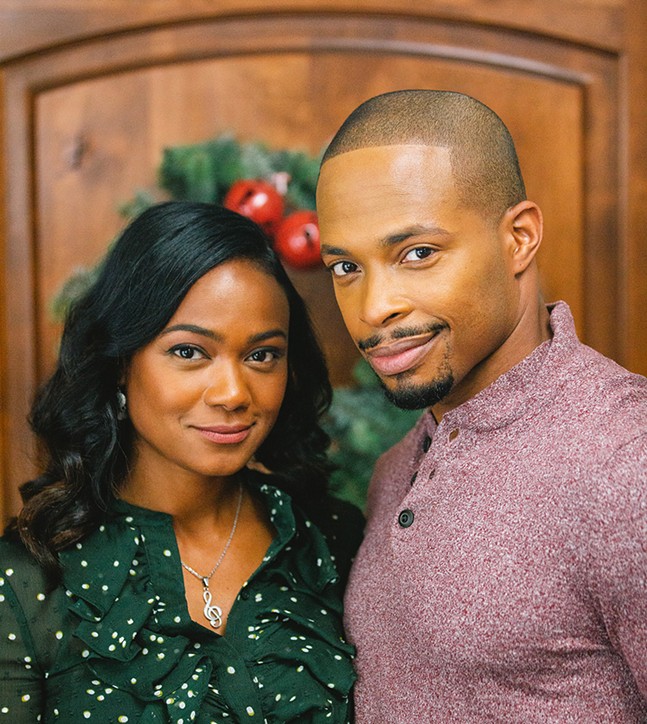 Is there some big-wig at Lifetime who got dumped by their high school sweetheart after graduating? Every other holiday movie on the network seems to have the same plot: small-town girl with Big City dreams leaves behind small-town boy, only to return years later and find out he's not only still there, but still pines for her.

In Jingle Belle, the protagonist who abandoned her hometown after graduating is Isabelle Williams (Tatyana Ali, best known as Ashley Banks from The Fresh Prince of Bel-Air), who works in the Big City for an advertising agency as a jingle writer. (Get it? Jingle Belle?).

When her sister (Keshia Knight Pulliam, a.k.a. Rudy Huxtable) begs her to return home to write a song for their hometown's 50th anniversary holiday show, Belle's boss orders her to go, thinking the small town visit will inspire her to write a new jingle for her biggest client.

But, oh no! When she arrives back home, guess who she finds out is directing the holiday show? The boy she left behind! I think you can probably predict the entire movie at this point. Belle and ex-boyfriend Christian (Cornelius Smith Jr. from Scandal) pen the song and it's a huge hit. In fact, it's so good, her boss wants to steal it for the ad agency's new jingle!

Only, that perfect song? IT'S SO BAD. The beat is fine, the singing is fine, but those lyrics? For a story that relies so heavily on the belief that this small-town girl was such a good writer that she got hired by a Manhattan ad agency, it probably should have hired a better songwriter of its own.

One shining light: the all-black cast is a refreshing change from the Candace Cameron-Bures and Lacey Chaberts that typically fill holiday TV movie screens. Fans of '90s sitcoms will also love seeing Ali and Knight Pulliam return to their TVs — can you believe both women are almost 40 years old?! They look amazing. Tempestt Bledsoe, who played Vanessa on The Cosby Show, also has a small role.

No one watches Lifetime holiday movies for the plots. It's that feel good feeling you get when the two main characters realize they're meant to be together, warming your heart while a love song plays over the end credits. For that, this one's worth watching. Just don't pay too close attention to those lyrics.