It has to be one of the only movies where Pittsburgh is referred to as a city of elite opportunity. 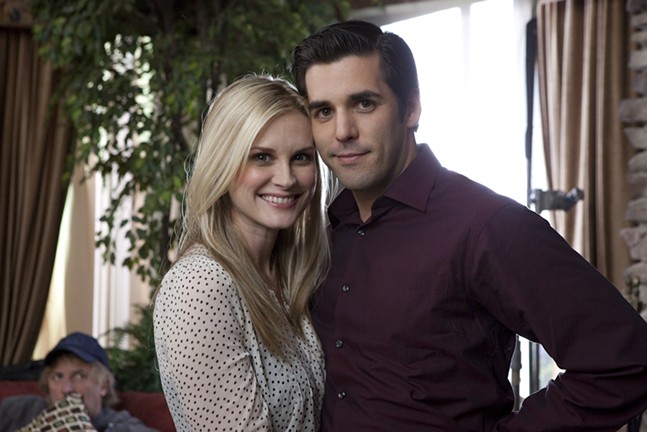 Crown Media
One of this people is Jeff Bridges' nephew.
In the spirit of the holiday season, Pittsburgh City Paper presents a holiday movie advent calendar. One holiday movie review, every day 'til Christmas (probably).

Holiday Engagement has to be one of the only movies where Pittsburgh is referred to as a city of elite opportunity. Now, I love the Steel City, but not because it’s a place to make the big bucks and ascend into the 1 percent’s inner circle. In, fact I love it for the opposite of that.

Anyway, the film’s protagonist is Hillary (Bonnie Somerville). She’s a journalist engaged to fast-rising executive Jason (David McKenna), who is up for a VP position at his company’s Pittsburgh office. The position is so demanding, alleges Jason, that he must break off the engagement to focus on his career. In Holiday Engagement, Pittsburgh is basically Wall Street.

Hillary is upset, but is even more distraught when she realizes she won’t have a man to bring home for Christmas. What is losing your future husband compared to a weekend of mild embarrassment with your family?

But Hillary is an enterprising lady and she takes to the the internet to find an actor, David (Jordan Bridges, who is also Jeff Bridges' nephew), to play her fiance. They set off to some wealthy suburb where Hillary grew up.

And this is where Holiday Engagement shines. It checks all the boxes of a silly, but fun holiday movie. Stupid plot device that no sane person would actually do: check. Weird drama with family over something most people would probably let slide: check.

In the suburb, both Hillary and David have some awkward run-ins. The most bizarre and legitimately funniest is when David, who is pretending to be a lawyer, is approached by Hillary’s father who is a council member for the suburban town. Apparently, the dad has participated in some campaign finance violations and election fraud, and he wants some legal advice from David.

Obviously, not-lawyer David can’t give him any but also can’t say why since that would blow his cover. Generally solid comedy. Especially because it’s incredibly ludicrous that a council member of some random suburb would participate in such crimes.


As a government reporter, I want to inform readers that suburban townships, especially wealthy ones, typically have very weak governments and council members are usually volunteers, who make pretty easy decisions like how to balance a budget where tax revenues are growing. This makes each scene with the dad and David a hoot.

Also, both David and Hillary have some actual chemistry and their eventual romance is well-paced and charming. Holiday Engagement is a fun watch, with just enough laughs and romance to get you through its 97 minute run time.

Holiday Engagement is available on Netflix.