These movies try so hard to be relatable and down-to-earth that they end up being completely alien.

In the spirit of the holiday season, Pittsburgh City Paper presents a holiday movie advent calendar. One holiday movie review, every day 'til Christmas (probably).

At this point in the game, I've seen enough cheesy Christmas movies to know which are bad in a fun way, and which are bad in a boring way. Pride, Prejudice, and Mistletoe is deeply boring and has next to nothing in common with its namesake.

Darcy Fitzwilliam (Lacey Chabert, Hallmark queen) is a busy business lady in New York with an office and clients and a briefcase. She heads home for the holidays to Pemberley, Ohio, which is a big deal since she missed the past two Christmases and the whole town knows!

While home, she helps her mom plan for an orphan charity silent auction, which is held in their big fancy home. The caterer/makeshift event planner is Luke Bennett (Brendan Penny, who looks like he was made in the same factory as Ryan Lochte), who Darcy does not get along with because they were enemies on the high school debate team. Nothing about their interactions says they don't get along, though.

Darcy is stressed by her work, and everyone keeps describing her state as "unsettled," as in "don't tell dad I'm unsettled" or "your mom tells me you're unsettled." It feels like an old-timey euphemism like "hysteria." Ultimately, Darcy remains unsettled until she decides to leave New York, work for her dad, and date the hometown boy. If you, too, are unsettled, try finding a mate and a permanent habitat.

I haven't read Pride and Prejudice but I have seen parts of the movie, and also Bridget Jones's Diary 800 times, therefore I know this movie has nothing in common with the original story, other than the names, vaguely. There are no fiery exchanges, no insults, no fighting.


Pride, Prejudice, and Mistletoe, like nearly every Hallmark movie, has a message that is pro-small towns, anti-big cities. Darcy's whole family resents that she lives and works in New York. They keep saying that they haven't seen her in so long and she replies something like "But I just FaceTimed you last week!" I guess there is also a vaguely busy-city-people-don't-have-time-for-real-connections-anymore message.

The best/worst part of these movies is that they try so hard to be relatable and down-to-earth that they end up being completely alien. Darcy is stressed because no one is buying tickets to the auction because there's a rumor that they lost their Christmas tree designer! The waitstaff doesn't show up to the event so they use orphans instead! Normal problems of regular everyday people. 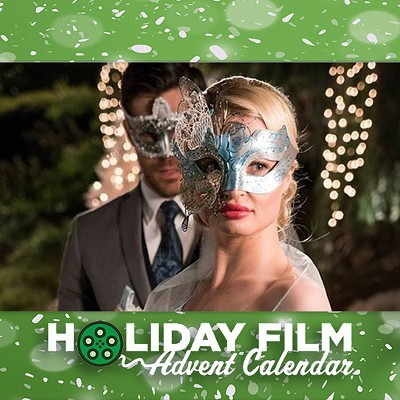