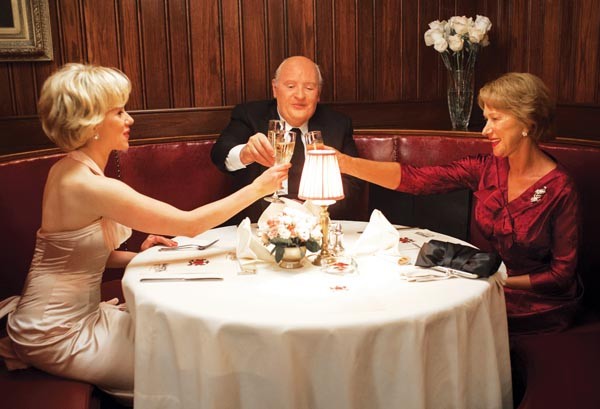 How the influential horror-thriller Psycho — and its indelible association with its director, Alfred Hitchcock — came to be is the subject of Sacha Gervasi's flawed but entertaining behind-the-scenes bauble, Hitchcock.

In 1959, Hitchcock (Anthony Hopkins) is living in Los Angeles with his wife and longtime collaborator, Alma (Helen Mirren). He's bored making romantic comedies, and decides to adapt a new novel, Psycho by Robert Bloch, for his next film. The studio balks, Hitch agrees to put up the financing and the filmmaking is on: casting, story re-writes, key directorial decisions and Hitch's assorted tantrums.

Hitchcock weaves together the making of Psycho with the personal and professional relationship of Hitchcock and Alma. Hanging like frayed bits are scenes depicting the couple's dalliances — for Hitch, it's his obsession with his leading ladies, including Psycho star Janet Leigh (Scarlett Johansson); for Alma, it's a friendship with a writer (Danny Huston). There are also unnecessary extra-narrative scenes in which infamous Wisconsin killer Ed Gein (the inspiration for Bloch's novel) advises Hitchcock. If it seems a bit cluttered, well, what else is there? Hitchcock may have been "the master of suspense," but we all know how the making of Psycho turns out.

Overall, Hitchcock is light fare, designed to please those already familiar with its subject matter. It's full of winks (Hitchcock introduces the film in the manner of his television show), nice period details and witty dialogue. Any serious problems that may have existed in the Hitchcocks' marriage, on the stage set or in the studio offices are all played here for amusement.

Gervasi struggles to put Psycho into historical context, particularly in depicting how shocking the movie was originally. Unfortunately, the film can only tell us this, as characters express disgust or dismay with the work. Their concerns are beyond quaint for today's audiences, who can now flip on network TV for even more gruesome stories.

Neither Hopkins nor Mirren are particularly good physical matches for their real-life counterparts, but they're both a delight to watch. Hopkins is heavily padded and prostheticized, and transforms mostly through lumbering mannerisms and a good imitation of Hitchcock's peculiar plummy drawl. He finds some humanity in his portrayal, which verges on caricature (in fairness, the real Hitchcock played an exaggerated version of himself). And though we can only guess how accurate the portrait is of Alma as a patient wife and strong-willed collaborator, it's undoubtedly Mirren who steals this film from her heavyweight co-star. Perhaps the film should have been called Alma.