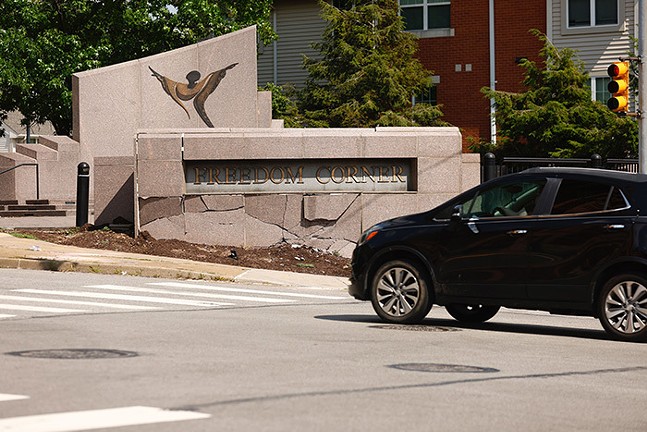 Local leaders are working to rebuild Pittsburgh’s historic Freedom Corner landmark after a recent car wreck left huge cracks below its nameplate and damage to the sidewalks surrounding it.

“We are devastated by the damage that has been done,” says Sala Udin, a civil rights activist who helped dedicate the memorial, and the current president of the Pittsburgh Public School Board. “We are working with two contractors to make repairs; one has volunteered to do the sidewalk.”

Freedom Corner has earned an important place in both Black and American history.

In 2001, the Freedom Corner memorial was dedicated to the Black community’s fight for freedom, long after civil rights activists in the city first began using it as a rallying point for social justice marches. 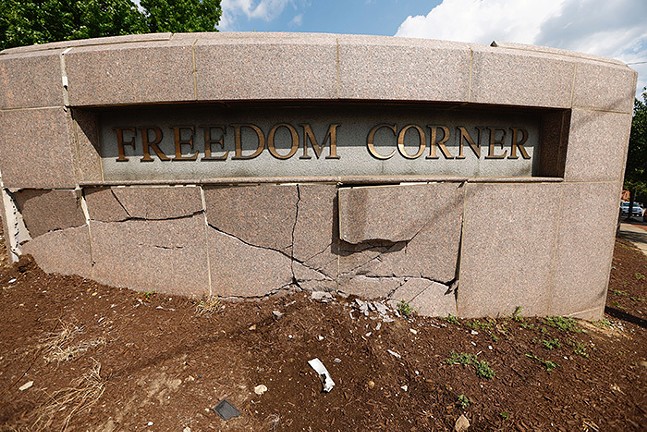 More specifically, Freedom Corner also marks the spot where the Black community put an end to the urban redevelopment projects pushed by the city of Pittsburgh. In the late 1950s, developers demolished the lower Hill District to eventually build the Civic Arena in 1961, but future development plans were halted by the community’s resistance.

The Freedom Corner site has also become a rallying point for activists to meet during marches and protests.

Following the assassination of Martin Luther King, the Hill District’s Black community started to demonstrate in the Hill District. They marched to the location of Freedom Corner, where they met face-to-face with law enforcement. To many Black Pittsburghers, the memorial symbolizes what the community had to overcome, but it also inspires hope for a better future.

Udin says that Councilman Daniel Lavelle has been active in trying to find a solution.