Historian Rob Ruck traces what was won -- and lost -- when baseball integrated.

Raceball explores "how the major leagues colonized the black and Latin game." 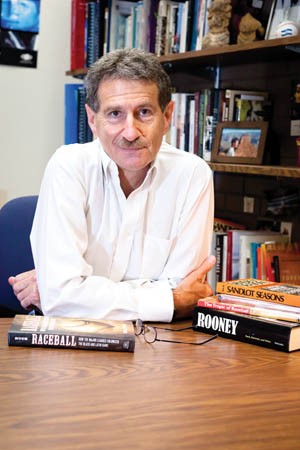 Photo by Renee Rosensteel
Rob Ruck
University of Pittsburgh senior history lecturer Rob Ruck studies sports and society. His books include Sandlot Seasons: Sport in Black Pittsburgh and The Tropic of Baseball:  Baseball in the Dominican Republic. His latest, Raceball: How the Major Leagues Colonized the Black and Latin Game (Beacon Press), explores the game's role in the African-American community in the U.S. and the Caribbean. Ruck recently spoke with City Paper.

How did integration change what sports meant?

The roles and meanings that sport [in the African-American community] had before integration in 1947 were extremely important and progressive, and baseball's integration was not an unmixed blessing. It came at a cost.

How did integration in Major League Baseball differ from other sports?

MLB integrated more slowly than the NFL or the NBA and it integrated on MLB's terms. It chose to ignore black managers, coaches, owners. When the Negro Leagues came to MLB and said, "Make us a high minor league," they wouldn't even consider it. So the ownership the Negro Leagues represented in the black community was lost and remains lost almost to this day.

On the 40th anniversary of Jackie Robinson [in 1987], there's hardly even a black manager [or] a black general manager. The front offices are lily-white, and there's no minority ownership. There are gains made by integration, but those gains are probably more important off the field, in terms of softening American social attitudes leading to Brown v. Board of Education and, a decade after that, the civil-rights laws.

Beyond teams folding and black players losing jobs, what did African Americans lose?

I think they lose ownership. That ownership can be economic, but also cultural capital. Those teams were controlled by African Americans and reflected the values and goals of the black community. [Now,] instead of building community, [sport] takes the talented athletic elite out of the community, and the disparities in income are so great it's hard for them even to go back.

I don't know that there's another player I have more respect for than Felipe Alou. He comes to the U.S. without English, they stick him in Lake Charles, La., in 1956, when the state legislature is passing a law making interracial competition in sport illegal. Now, Felipe's pride in who he is makes him resist that. When he makes it to the majors, he is very much like Clemente in speaking forthrightly about what he sees as problems.

Historically, I think the most important Latino player is Roberto Clemente. After winning the 1971 World Series, a championship that Clemente powered the Pirates to … while being interviewed on national TV, he said, "First I would like to speak in Spanish and talk to my parents and the people of Puerto Rico." Here were these players who had largely been considered either cultural oddities or looked at by most white fans as black -- not as Latino, not as Spanish-speaking. Clemente changed that image more than any other player.

And that's changed baseball too.

When I started to travel in the [Dominican Republic] in the late '80s, 10 percent of all ballplayers in MLB were Latino. Now, it's getting close to 30 percent and half of those in the minors. If you look at the changing demographics of the fanbase, it's increasingly Latin American. The Dodgers after Fernando Valenzuela, the Mets in recent years, have seen pretty radical shifts in who their fans are.

What is the effect of today's MLB draft in Latin America?

That created an opening for the buscones [a kind of a street agent], who get their hooks in [teen-age prospects] and try to make money from them. There's over 1,000 of them in the Dominican alone. What you've got are many poor, unsophisticated, vulnerable kids who do not continue their education once a buscone gets control. If they're good, when the kid is 16, the buscone tries to get a bidding war started at the MLB academies.

MLB, back in the late '80s, saw that they could sign Latin kids cheaply, develop great talent and make a lot of money. But those bonuses go up and up and … now you've got kids getting $3 [million] and $4 million, of which the buscone takes 30 percent, basically. Some of them are honest, ethical, do a good job developing the kids. Others do everything to make the kid a more enticing prospect, including steroids.

With so many of these kids so hungry to make it in sport, we've got a situation akin to the trafficking in children.