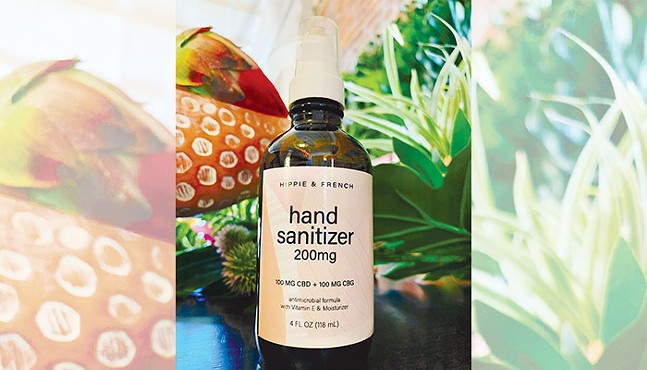 Lindsay French, founder of local CBD boutique Hippie & French, started selling her first batch of hand sanitizer last week. With the release, the store was following in the footsteps of many local distilleries who stepped in to produce sanitizer in light of shortages. But unlike distilleries, the Hippie & French version included 100 milligrams of cannabiodal (CBD) and 100 milligrams of cannabigerol (CBG).

The hand sanitizer (and most of the Hippie & French products) are produced by a manufacturer in Colorado. French’s sanitizer recipe is a fairly standard mix that adheres to guidelines put out by the Centers for Disease Control and Prevention: ethanol (at a concentration of at least 60%) as the main ingredient with glycerin, essential oils, CBD, and CBG. French notes that the two included cannabinoids — CBD and CBG — carry their own antibacterial and antimicrobial properties, which makes them the perfect partner to a disinfectant.

French says the hand sanitizer will work similar to other topical CBD treatments, though it’s effective for “different reasons.” Typically, she explains, a pain-relieving topical treatment should contain 300 milligrams of CBD. Because the purpose of hand sanitizer is to disinfect, not relieve pain, a lesser amount is just as effective. And, French notes, the addition of alcohol only enhances the efficiency of the cannabinoids’ antibacterial qualities.

Since the pandemic hit, French says her store has seen a spike in product sales. The first batch of Hippie & French hand sanitizer sold out in 24 hours.

“People are sitting at home and anxious about what's going to happen to themselves, their friends, or their loved ones. I've been so grateful to be able to provide some anxiety relief amongst all the chaos and uncertainty,” French says.

“But it doesn’t feel good to necessarily be profiting from this time," she adds.

With that in mind, French has decided to donate 100% of the profits from her hand sanitizer to the Greater Pittsburgh Community Food Bank. Additionally, 10% of all profits made at her boutique in April will be donated to the food bank.

“[The donation] was not something I had originally intended,” French says. “But I'm watching the news of these huge lines at the food bank. Having been food-insecure myself at one time, I can't imagine any one of my customers struggling like that. It breaks my heart to think of anyone in our city not having food to eat right now. It seemed like the obvious thing to do.”