Hines Ward puts his stamp on Table 86 in Seven Fields, north of Pittsburgh

At a restaurant whose fundamental appeal is its celebrity association, it was impressive that the food reached such heights while hitting so few lows 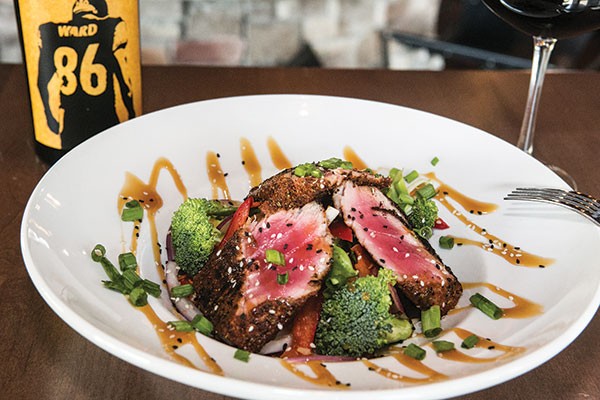 These days, it’s not enough to be a celebrity; people famous for their prowess on the silver screen or athletic field wish to broaden their appeal, showing that they have other interests.

Hines Ward’s Table 86 is the second restaurant from a former Steeler that we’ve been to. Both have used their uniform numbers in their names, but there the resemblance stops. Where Jerome Bettis went all in with the football ties, and focused on creating an upscale sports bar, Hines Ward has taken a different route.

His are actually two distinct establishments located in an upscale mini-plaza along Route 228 in Seven Fields. Vines Wine Bar is a relatively intimate space tucked next to a charming outdoor terrace. Table 86 Kitchen & Cocktails is an expansive restaurant that is centered around a TV-laden bar, but also features smaller dining rooms and seating around a fireplace-in-the-round beneath a massive copper hood. The overlay of football memorabilia upon Old World-style decor, largely inherited from Table 86’s predecessor, makes for an odd combination that speaks to the goals of the restaurant: to be a mecca for football fans on Sundays as well as a destination dining location for the Cranberry area.

The same goals are evident in the menu, one of the broadest we’ve seen in our recent era of super-specialized kitchens. There’s everything from nachos and burgers to blackened tuna and Korean barbecue ribs. This last reflects the personal interest of Ward, whose mother is Korean, in the cuisine of her homeland.

The breadth of the menu is rendered manageable by its lack of depth. Under each category are just a few options, making it fairly easy to figure out if you’re going to find a flatbread, burger or pasta you’ll like. Items whose prices end in 86 cents are specialties of the house.

The first of these, the appetizer Mae Oon shrimp, made a great impression. Though the menu said “tempura batter,” the coating didn’t have the ethereal fluffiness we associate with that preparation. Nonetheless, it was light and crispy even after absorbing the mildly sweet Korean barbecue sauce, flecked with sesame seeds. An accompanying creamy dip with lime and cilantro was tasty but almost superfluous, while a bed of “Asian slaw” appeared to be just shredded cole slaw, with no apparent dressing tying it together. Still, Mae Oon merits its status as a signature dish, one we would definitely order again.

Sicilian flatbread is named after its topping, not its crust, which was paper-thin, almost crackery. Amazingly, it held up beneath a remarkably heavy load of melted fontina, big chunks of roasted peppers and onions, and slices of hot Italian sausage. In whole, it was zesty and satisfying. But chicken farfalle pasta with plum tomatoes, garlic and Romano cheese in a pink cream sauce was disappointingly under-seasoned except for quite a bit of finely snipped parsley.

Of a dozen burgers and sandwiches, most were served on big, buttery brioche buns. The MVP burger topped a massive half-pound of beef with pulled pork, cheddar, bacon and Asian slaw. Here the slaw, mildly vinegary, was a welcome bright note amidst all that heavy meat. The burger was oddly soft, as if made from tenderloin (the menu says “ground steak”), but it combined well with slightly chewy bacon and slightly sweet pork. On a Korean barbecue pulled-pork sandwich, the sauce stood out for its lightness, which seemed to impart the flavor of bulgogi without hiding the pork.

Both sandwiches came with fries, which were standouts. The days of greasy, thick-cut fries are largely gone in Pittsburgh, but it’s still rare to get ones that are this fluffy and barely-there inside, yet heartily crisp outside. We’d love to see the kitchen use them for poutine or some other dish that would put them front and center.

All of the signature entrees — Korean barbecue ribs, crab mac-and-cheese, stuffed pork chop and Asian skirt steak — looked appealing, but we chose the pork to test Table 86’s chophouse chops. It was extraordinary, slow-roasted until it took on a texture so tender and luscious that it was almost like king salmon, flaking beneath the fork. The stuffing, an ordinary bread-and-celery combo, added a bit of flavor, but the meat stood on its own. The pan gravy was thick and well balanced, and Yukon smashed potatoes were pleasingly rustic.

At a restaurant whose fundamental appeal is its celebrity association, it was impressive that the food reached such heights while hitting so few lows. It would have been nice for the Korean cuisine to have been a more assertive presence, but that’s a quibble. As he did so often in his Steelers career, at Table 86, Hines Ward has come through.