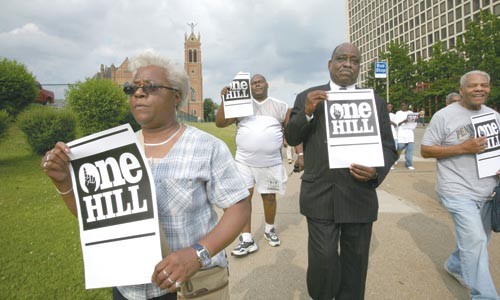 Photo by Heather Mull
Members of One Hill marched from Freedom Corner to the Mellon Arena on June 4 to make sure the community benefits from the construction of a new Penguins Arena.

The activists behind the One Hill initiative say their neighborhood has been waiting a half-century to benefit from what happens to it. If the initiative's June 4 kickoff is any indication, however, they may be kept on the sidelines a little while longer.

Grassroots efforts clamoring for a community benefits agreement with the Penguins over the new-arena development have been in the works, but activists are nowhere near where they need to be now: the negotiation table.

One Hill, the coalition pushing the community benefits agreement, or CBA, made its first public appearance to much media fanfare last Monday, less than an hour before the Penguins and the city's planning department hosted the first community meeting to kick off the development's master-planning process. A CBA is a legally binding agreement struck by developers of mega-projects and nearvy communities to provide for economic and other benefits.

Holding white placards with the group's name and donning white baseball caps emblazoned with the coalition's bold black logo, the procession of more than 50 marched from Freedom Corner in the Hill down to the Mellon Arena, where the meeting was to take place.

Sparks flew when it came time for the Q&A session, when the new-fangled coalition could flex its rhetorical muscles. The perfect opportunity came when Don Carter, principal of Urban Design Associates, the Downtown firm retained by the Penguins to draft the master plan, declared that this was not the forum to talk about the CBA.

"That's a big mistake," charged Carl Redwood, a member of the coalition representing the Hill District Consensus Group, "that the CBA is not part of the planning process."

Carter explained that Monday's meeting was to inform the public on how planning for the new arena would move forward, and said that the community can participate in the planning. He emphasized that the public has to trust that the process would be open and transparent.

"If it's a public process, it should be defined jointly," said Justin Laing, another member and a convener of the coalition. "You don't define what the debate is."

"This is not an empty process," countered Carter. "We're going to throw the door as wide open as possible."

However, questions remain about when and how the coalition will gain a seat at the table to talk about the CBA. The One Hill coalition is the first campaign of Pittsburgh UNITED, a new umbrella group of 16 organizations and counting. The organizations include the Service Employees International Union, the Housing Alliance of Pennsylvania and the League of Young Voters.

Seeds of the coalition were sown late last year, and members have since been meeting weekly to strategize. They have even laid out detailed planks, in four pages covering community development, business, education, employment, housing, preservation and public safety. For example, the coalition wants arena developers to contribute to a community development fund and to make sure that a certain percentage of subcontractors are minorities.

Khari Mosley, who on Thursday was appointed campaign director of Pittsburgh UNITED to oversee the One Hill coalition, says, "Right now we're focusing on building the consensus within the Hill District and making sure the CBA reflects what the community needs." Mosley said the four-page document outlining the proposed CBA is a work in progress.

Meanwhile, the Penguins have invited George Moses and Marimba Milliones, both with deep roots in the Hill, to act as community liaisons.

"As you look at history, we were never in this room," said Moses at Monday's meeting. "We will be at the table."

"The Penguins understand that the process [of organizing for a CBA] is going on," Moses said later. "I can't say they would jump up and embrace it."

Officials from the Pittsburgh Penguins did not return calls for comment.

Mosley says the coalition is "very close" to forging the consensus and that it plans within weeks to bring the CBA demand to the negotiation table.

Bill Robinson, the Allegheny County councilman who represents the Hill, says he's told coalition members that they need to make their case soon.

"Each passing day works against the community organization," says Robinson. "The concrete has been poured. They will find themselves stepping on soft concrete which is going to harden very quickly."