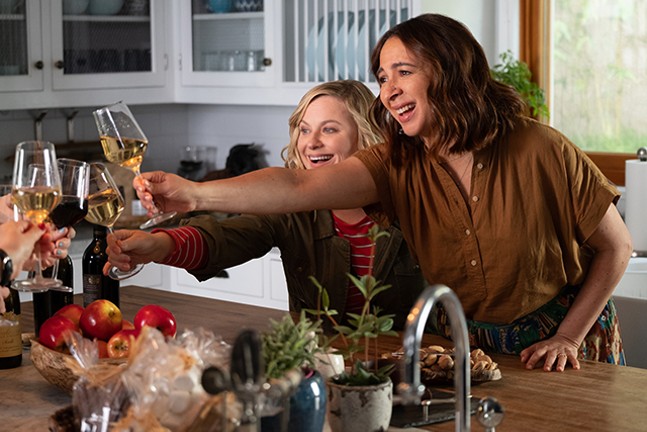 There should be a word for the thing that happens when the cast of a movie is so stacked it's almost doomed for mediocrity. A version of this occurs with the Amy Poehler-directed Netflix film Wine Country which stars her real-life circle of friends.

A group of women who have been friends since working together at a pizza shop in Chicago reunites for Rebecca's (Rachel Dratch) 50th birthday in Napa. The friend group includes Dratch and Poehler, along with Maya Rudolph, Ana Gasteyer, Paula Pell, and Emily Spivey (who wrote the film). As is expected in a friend reunion film like this, old conflicts bubble to the surface, secrets come out, and lots and lots of wine is drunk.

The plot is thin, and the conflicts are mostly weak. It feels like another casualty in Netflix's exhausting quest to produce as much content as possible without giving much time or money to any one project. There are confusing loose ends in the plot, like how one character keeps whipping out a bag of molly, but they never take it. It feels like half a dozen scenes were left on the cutting-room floor.

But these are also some of the funniest people in their class, so there are plenty of truly hilarious jokes. Dratch spiritually bonds with a family of raccoons. Rudolph flosses. Poehler delivers one of the best deadpan stares I've ever seen. All the women roll down a hill. It's fun, and it's full of wine, and that’s enough.

As a bonus, the score for the film was done by Wendy Melvoin and Lisa Coleman, of Prince's band The Revolution.