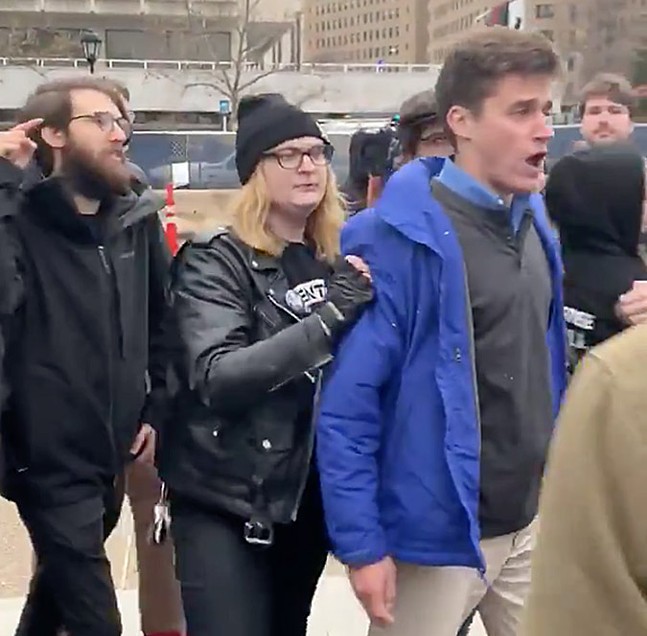 Screencap from a video posted to Twitter by @MikeElk
On Saturday, more than 200 people rallied in Schenley Plaza to oppose any escalated war efforts in the Middle East following the U.S. ordered killing of a high-ranking Iranian official. The Pittsburgh rally was organized by the ANSWER Coalition, an anti-war and civil rights group.

Across the street, a second smaller group of only five protesters were also rallying against a potential war. They could be heard chanting “no war with Iran,” but their protest signs contained anti-Semitic depictions. One read “Deport Kushner” complete with Stars of David dripping in blood. (Jared Kushner, husband of Ivanka Trump and part of the Trump administration, is Jewish and an American-born U.S. Citizen.)

They were holding these anti-Semitic signs earlier pic.twitter.com/c2JOkiGbqU

Eventually, two of the people who were rallying on the other side of Forbes Avenue walked over to Schenley Plaza. A speaker at the ANSWER Coalition rally then pointed out the two men and a large group of protesters began to demand they leave. Protesters shouted “Nazis Out, Nazis Out!” and started pushing them towards the intersection.

Eventually the men left, and the crowd cheered. Pittsburgh Police arrived on scene shortly after the incident.

Pittsburgh City Paper witnessed the encounter and Mike Elk, labor reporter for the Pay Day Report, posted a video of the event that quickly went viral.

Dozens of people on social media identified one of the men being pushed out as Greg Conte, a well-known white supremacist who was the director of operations at The National Policy Institute, a white nationalist group run by Richard Spencer. Conte also attended the Unite the Right rally in 2017, where participants promoted white supremacy and white nationalism.

Ann Belser, a reporter with community newspaper Print, spoke with the man in question and confirmed that his name was Greg Conte in a tweet reply to Elk.

“You had better listen to the truth. We could have a discussion. Are you that afraid of what I have to say?” asked Conte as the crowd continued to drown him out with chants of “Nazis out.”

Since his appearance at the Unite the Right rally, Conte has been fired from his substitute teaching job at an all-girls Catholic school in Maryland because of his prominent role in white nationalism. After getting fired, Conte told Washington, D.C. television station ABC7 in Januray 2018 that “diversity leads to social problems, it leads to conflict, it leads to war."

Yesterday, someone who identified themselves as one of his former students tweeted that Conte treated her differently after discovering she was Jewish.


This nazi was my highschool substitute teacher. Once in history class he asked me if I was Jewish and when I said yes he didn’t make eye contact with me again. https://t.co/q46J7aUiiR

In March 2018, Conte also was arrested in Michigan after clashing with protesters who were opposed to a white nationalist speaking at Michigan State University. A month later, the Southern Poverty Law Center reported Conte had left Spencer’s National Policy Institute.

Conte could be in Pittsburgh to visit Warren Balogh, another white supremacist who is joining Conte in suing the city of Charlottesville and the commonwealth of Virginia. According to a civil complaint filed in Virginia, Balogh and Conte are representing themselves.

Balogh lives in Mt. Washington, and wrote a letter to the editor to Pittsburgh Post-Gazette last February titled "Raising an alarm for freedom of speech” where he complained that local community groups were reporting hate speech to the FBI.

There’s reason to believe that Conte and the group across the street from Schenley Plaza were protesting as a way to infiltrate other anti-war protesters to spread his message of white supremacy. Though Conte quit Spencer’s organization in 2018, his resignation letter said, “I remain totally committed to fighting for the rights of our people. More to come.” Also, while he was being kicked out of Schenley Plaza, Conte appears to be signing the white nationalist Okay Hand Signal. 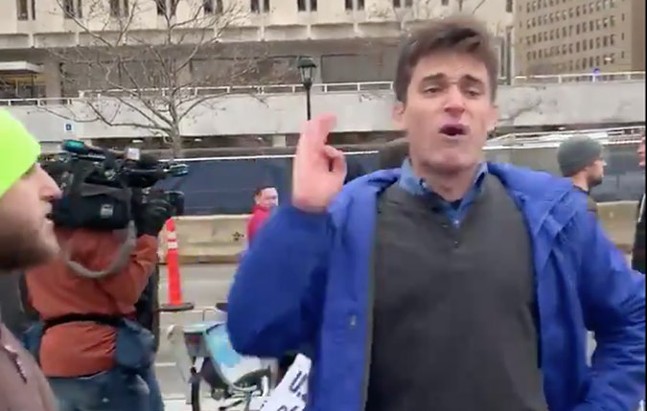 Screencap from a video posted to Twitter by @MikeElk
On Saturday, the day of nationwide anti-war protests organized by the ANSWER Coalition, Spencer retweeted some anti-war tweets from ANSWER, as well as anti-Israel tweets during the day. He also changed his Twitter background with a photo saying “stop war with Iran.”

Spencer made his reasons for opposing a war in the Middle East known when he tweeted on Saturday, “Donald Trump is wicked and disgusting. He’s threatening to destroy Aryan heritage sites and the Iranian people for a Zionist war. Let’s stop making excuses for him, and stop pretending like we can overlook this stuff, even if a war doesn’t take place.”

In a leaked recording, Spencer can be heard using racist and anti-Semitic slurs following the Unite the Right rally, which he didn’t attend, and expressing frustration at the criticism the event received after a white supremacist killed counter protester Heather Heyer.

Clearly, some Pittsburgers believed Conte and his allies were trying to spread a similar message as Spencer and quickly kicked them out of Schenley Plaza. City Paper overheard one protester say, “This is a perfect example of why this movement must be intersectional.”


Example: 73829384 of why I love Pittsburgh. No violence, peaceful anti-war protest attempted to be ruined by some stupid nazis. And no Pittsburghers even tried to make this confrontation violent. I love my city. https://t.co/igiqFaLQLZ