Hidden Media Network promises fun, immersive experiences, but some say everything’s not as it seems

CP Photo: Amanda Waltz
The Alice cocktail experience from Hidden Media Network on Liberty Avenue
At 11 a.m. on a Saturday, in a Downtown Pittsburgh storefront, I enter Wonderland. The Mad Hatter and White Rabbit are wearing masks, while the March Hare has on a clear face shield. Tables are set with porcelain teapots, clocks, and other knick-knacks, and fake vines cover the walls and ceiling. Overseeing it all is a giant, light-up Chesire cat face.

Instead of a mysterious bottle of potion labeled “Drink Me,” I’m given a sickeningly sweet, peach-flavored shooter with enough alcohol to get me slightly buzzed — that I had skipped breakfast that morning didn’t help.

This isn’t exactly the vision author Lewis Carroll had for Alice’s Adventures in Wonderland, but it’s what the international event planning company Hidden Media Network has delivered to Pittsburgh in the form of a themed cocktail experience designed to transport you into a world of tea parties, talking animals, and magic mushrooms.

The Hidden website calls its model a “discovery platform” offering ticket holders “all the best virtual and live experiences in over 30 cities around the world.” You can search from “thousands of experiences” taking place around the world, an ambitious and seemingly impossible feat by any standard.

Not only that, the event locations are often kept secret, and many times even ticket holders are left without a destination until the day before their event happens.

But the company appears as mysterious as its approach, and some former ticket holders in Pittsburgh have complained that Hidden misled them. Others question if Hidden has the safety of its customers and staff in mind, claiming that events like The Alice are not following COVID-19 safety protocols.

Besides The Alice, the Hidden Pittsburgh page entices with a long list of ongoing and upcoming events, a seemingly endless array of themed cocktail experiences, drag brunches, trivia nights, dance parties, and more. Inexplicably, there’s even a secret chicken wing festival. Under the FAQ section on Hidden’s website, it also says anyone can submit an event to be advertised on their site for a price, offered via "various paid packages if selected.”

One of the most popular events presented by Hidden is the Brick Bar, a Lego-themed pop-up that appeared in Pittsburgh in 2020, but it’s been heavily advertising The Alice since May 2021, with 12 active sponsored ads currently running on Facebook.

While many events are labeled as “Free,” clicking on them reveals that the deal only applies to an email registry notifying you when tickets for the event actually go on sale. Even then, it reads that “signing up does not guarantee you a ticket for the actual event.”

I had received emails about The Alice and decided to see for myself how Hidden operates. So I paid $47 (plus an additional $2.82 in fees) for a single ticket.

The event took place at 705 Liberty Ave., a space usually designated for temporary pop-up events like this — it has previously hosted the holiday Miracle bar, which was unaffiliated with Hidden. The performers wore face coverings for the most part (the Mad Hatter did remove his a few times), and hand sanitizer was provided at each table. Beyond that, guests came maskless and tables were crammed close together. It was also impossible to social distance in the small space as you were encouraged to wander around solving riddles and finding hidden vials.

Pittsburgh resident Christina Szejk says she felt uncomfortable when she visited The Alice in early August. She and her boyfriend were invited to go with another couple, who had tickets for the event.

Szejk says she emailed Hidden beforehand about their COVID-19 protocols, as she was concerned about the positive cases once again climbing in Allegheny County.

“I asked, ‘Is it COVID safe? What kind of precautions are they taking?’” says Szejk.

She says she received a confusing response about the pandemic situation in Sydney (from what information Pittsburgh City Paper could gather, Hidden is based in Australia). When Szejk replied that she was in Pittsburgh and the event was the next day, someone named “Bella” emailed back that “the event is compliant with all COVID regulations.”

When Szejk arrived, she says only the performers had masks and the space, which she called “tiny,” was packed with about 25 guests, plus the staff.

“So we took a sip of our drink, and we just left,” says Szejk, adding that her party stayed for about 15 minutes. “And as we were walking out, the door-greeter person stopped us. … I said, ‘This just doesn't feel safe. There's nobody with a mask, there's no ventilation.’” Szejk says the door-greeter then told her, “Please tell the company, please email the company. This doesn't feel safe for us, either.”

Because of the difficulty Szejk had emailing the company in the first place, she decided to post a comment on the Hidden Pittsburgh Facebook page relaying her experience.

The lack of access to the company is no surprise when looking at the Hidden website. There’s no About Us page, a standard for most businesses, and therefore no company headquarter address, bios for the president or CEO, or any other staff member. The only means of communicating with the company is through a single email address, hello@explorehidden.com.

A screencap from some of Pittsburgh offerings at explorehidden.com
Also confusing is Hidden’s identity. Based on records and emails, the company appears to be previously or alternately known as Viral Ventures and Immersive Ventures, or is affiliated with the companies. Aden Levin, who is listed as the Director of Viral Ventures on LinkedIn is also listed as Hidden's Co-Founder. One Backstage ad from April 2021 was seeking performers for a Pitch Black dining experience taking place in Pittsburgh, as well as other cities. The company seemingly uses both brands by listing the ad under “Viral Ventures – ExploreHidden.”

According to an April 2021 story by Pittsburgh online publication NEXTpittsburgh, DiAnoia’s Eatery in the Strip District was serving as the host venue for Pitch Black on June 9 and 10, with the promise that more dates “may be added to meet demand.” Hidden organizes an event at a host venue, with the venue having little to nothing to do with the actual planning or execution of the event.

Pittsburgh resident Emily Zambito bought tickets to Pitch Black in June and says she and her husband were “fully scammed” by Hidden. Zambito shared emails with City Paper showing that, on June 24, she requested a refund after the company suddenly changed the Pitch Black venue from DiAnoia’s to Rock Bottom Brewery.

In the email, Zambito says she bought the tickets — which cost $80 per person — thinking she was eating at DiAnoia’s, describing the post-ticket purchase change as a “bait and switch, and honestly a scam.”

For days, Zambito emailed back and forth with a Hidden representative, also named “Bella,” until the company agreed to grant her a partial refund on July 1.

“It was a really frustrating situation and I feel like they are taking advantage of people post-pandemic who are eager to get back out and be at events,” says Zambito. 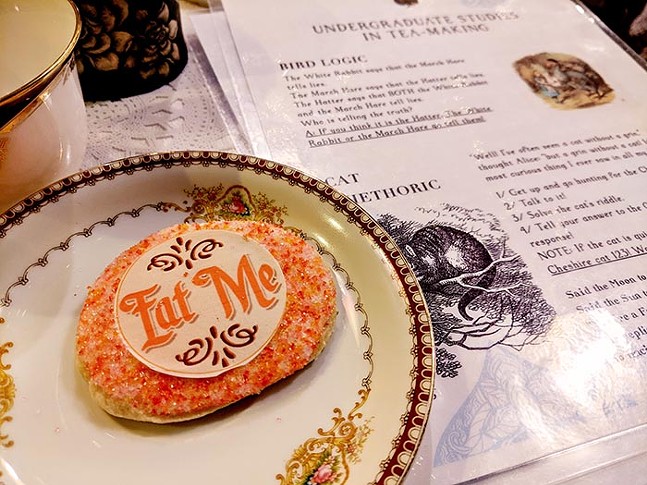 CP Photo: Amanda Waltz
The Alice cocktail experience from Hidden Media Network on Liberty Avenue
When asked about their experience working on the Pitch Black event with Viral Ventures, a spokesperson from DiAnoia’s gave a less than glowing review.

“Unfortunately, we did not have a positive experience working with the organizers of Pitch Black,” says the DiAnoia’s Eatery spokesperson. “In addition to the two contracted events they booked and hosted in our space, they went on to sell tickets to additional dates at our location that we never agreed to. In the end, they held the events at another location, but made the change after many guests had already purchased tickets. So, people bought tickets thinking they were dining at DiAnoia’s, but on the day of the event, it was held at a different restaurant and communication to the ticket buyers was poor. Many showed up at our location for the dinners, understandably confused, and some even thought they were having our food at the other restaurant. Altogether, we felt the entire experience was misleading to the ticket buyers.”

City Paper emailed Shelley Allen, who does PR and communications for Hidden, about the company’s customer service approach, and the strict no-refund policy stated on its FAQs page. Allen says Hidden has a “whole customer service team who deal with complaints/ issues and they can be reached at hello@explorehidden.com,” and that customers can also reach out on the company’s Facebook and Instagram pages.

“Tickets sold are the same as a concert ticket, and this is the same with the majority of ticketing platforms,” Allen added. “We cannot refund customers if they choose to cancel at the last minute as it is a huge loss of revenue. They can resell/gift their tickets if they can no longer attend or if possible we move their tickets to another date for them.”

There’s also the question if Hidden does, in fact, provide “all the best virtual and live experiences,” a claim I found to be dubious during my visit to The Alice. For my $49.82, I received one shooter and what looked like a store-bought sugar cookie, followed 45 minutes later by a second cocktail. If I wanted another drink before then, I had to pay $10 for flavored shooters with names like Tweedledee and Tweedle-Rum or Some Kind of Mushroom, which, despite the name, did not contain actual mushrooms.

There are, however, also positive reviews about The Alice on social media. The decor and props provide lots of opportunities for selfies, and there are a lot of them to be found on Instagram. “Super, super fun, but Wonderland in Pittsburgh was tight quarters for sure,” posted one user on Instagram when asked about the inside situation because of COVID.

Others across the globe have expressed their dissatisfaction with Hidden events. A 2019 article on an Australian news site says guests paid $152 to attend a Harry Potter-themed Wizard’s Brunch in Melbourne, described as being partly organized by Immersive Ventures and promoted by Viral Ventures. They claim the event disappointed with “sub-par” entertainment, barely any table service, and food that consisted of “deflated” panna cotta and “stale” supermarket cake. Like at The Alice, they also had to pay for extra cocktails.

Szejk says The Alice was “cute,” but not “Cirque du Soleil or anything,” and was also not impressed with the drink she was served. Overall, she says she has no idea how Hidden could realistically pull off all the events their website touts.

“How can they be doing this and doing it well?” says Szejk. “It's like when you go to a restaurant that has a menu that's 40 pages long. There's no way they can do all of this well.”

5 local spots to get festive baked goods and holiday desserts