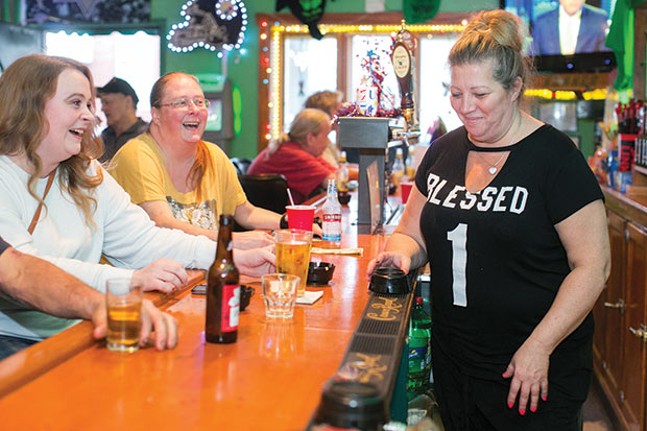 Depending on your outlook, Lawrenceville is either a paradise or a punchline. Arguably Pittsburgh's hipster headquarters, it is saddled with all the baggage that kind of designation entails. For devotees and detractors, the main commercial strip of Butler Street is a focus of Lawrenceville's identity — embodying a relentless dynamic of new supplanting old.

Kelly's Korner is the antidote to Butler Street.

Occupying a corner spot (naturally) among the slope-side homes of 45th Street, Kelly's announces itself as a basic bar in the best possible ways. Like all good neighborhood spots, it's not big. With a bar that seats less than 10, it's a given you'll be involved in multiple conversations … even as a bystander. If spooked by the idea of a stranger suddenly chatting up and welcoming a newcomer, just remember it’s Pittsburgh. We do that here.

Kelly's also quietly and unrepentantly maintains ties to an older era. The wooden bar’s top, freckled with cigarette burns, is a tangible reminder everyone is free to light up. Sales are cash-only.

Even the jukebox skews retro. It's not uncommon to hear Neil Diamond, Paul McCartney and Wings, and The Knack played in quick succession. Jumbo-size bags of chips and pretzels hang abundantly from the vintage back bar. A pinball machine patiently waits for the next person with a few quarters to spare.

Drink-wise, an occasional unfussy cocktail can be found, but beer is clearly the beverage of choice for regulars. A respectable row of taps has a prominent position up front, while a nearby cooler stands at the ready with an array of choices for the bottle-and-can brigade. And with certain brands coming in around $2, it's a bargain that's hard to ignore.

The other thing that's hard to ignore is Irish pride evident everywhere. There's a liberal use of green, and even the wallpaper bears a subtle shamrock pattern. Leprechaun figurines coyly peek out from clusters of assorted knick-knacks, but it’s not a display of manufactured cuteness.

Trends obviously come and go, and neighborhoods change. The cycles of fashion can erode the personality of even the most established businesses. But unassuming bars such as Kelly's have a stamina that provide deeper character coupled with greater longevity.

We should all raise a glass to that.