“If draft beer is your thing, you can’t be choosy. There’s only one on offer.” 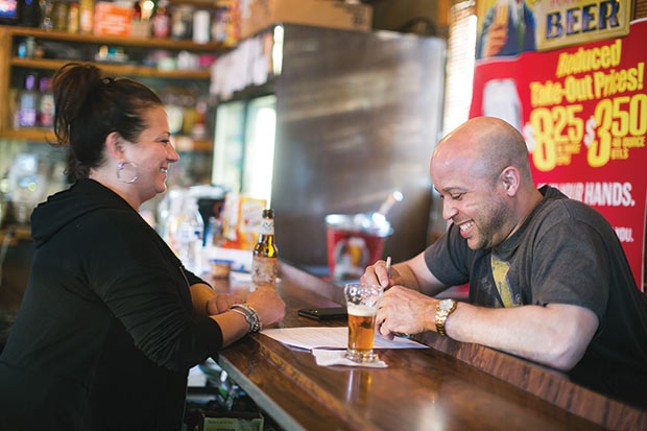 CP photo by John Colombo
DeeDee, a bartender at Howard’s for 15 years, shares a laugh with a customer

Some bars are liminal spaces. They appear mundane but give off extraordinary energy. Everything about them seems unremarkable except for some curious aspect that can't quite be identified. They're simultaneously common and unexpected. And they're the type of environment that shifts your perception. Howard's Park Place Pub is one of those bars.

Surrounded by a swath of well-kept grass and flower beds your grandmother would envy, it doesn't resemble a bar so much as a building from a model train set made life-size. Standing slightly apart from the neighborhood’s houses and apartments, it radiates an odd, enticing charm. The colorful stripes painted on the exterior suggest an ice cream stand, but the smattering of beer signs indicates the grownups-only nature of the place. The make-believe clock above the door always reads 5 (p.m.). If Tim Burton and Wes Anderson opened a bar together, this would be it.

Entering Howard's, you’re undeniably crossing a threshold. The metal-gated door is a bit imposing, and remains locked until the bartender buzzes you in. At that point, you've made the transition and entered a new realm. Initially, it appears to be an average neighborhood joint, but there’s a layer of uniqueness that pulls it pleasantly off-center. Small details slowly reveal themselves.

If draft beer is your thing, you can’t be choosy. There’s only one on offer, and the solitary tap stands proudly like the sword in the stone. A high-mileage toaster oven hints that food is available but will be a strictly no-frills affair. Sharing shelf space with an assortment of hot sauce bottles is a handful of obscure reference books (presumably used to settle the occasional dispute). Christmas lights drape the ceiling in a cheery aura, regardless of the season.

The overall atmosphere is a seamless balance of old and new, never tipping completely into nostalgia or trendiness. The bar’s age and history are evident, but so is its vibrancy. However, the one thing you notice above all is that everyone here is just so unfailingly nice.

These and dozens of other things combine to make you immediately feel comfortable and welcome. This is the spot where you go for one drink but end up happily sticking around longer. Quirky warmth seems to seep from every surface and hold you in place. Even if it's your first visit, you somehow feel as though you've been coming here for years. And of course, in true old Pittsburgh style, it’s cash only.