A formulaic but feel-good tale of science, determination and overcoming obstacles for three black women in the 1960s space race 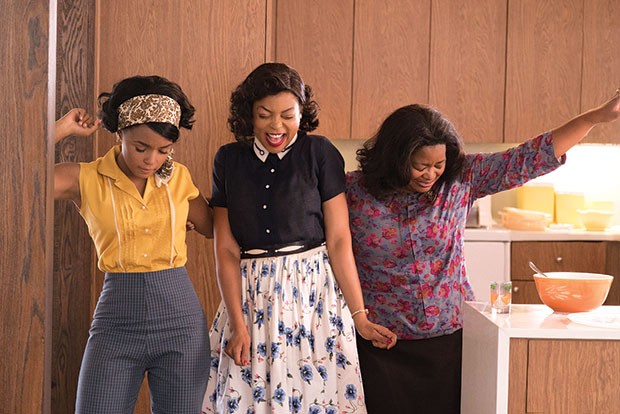 Theodore Melfi’s bio-pic Hidden Figures shines a spotlight on three African-American women who helped put men into space in the 1960s. Based on Margot Lee Shetterly’s eponymous book, it’s a feel-good tale of science, determination and overcoming obstacles in the Jim Crow South. The three women work at NASA, in Hampton, Va. It’s 1961, and the Americans want to put a man in orbit. The ladies are confined to the segregated “colored computers” building, where the math whizzes check calculations with pencils, slide rules and chalkboards.

But new frontiers come with new opportunities — and new hurdles: Mary Jackson (Janelle Monae) wants to study to be an engineer and fights for admission to an all-white night school; Dorothy Vaughn (Octavia Spencer) does the work of a supervisor, without the title or compensation; undaunted, she trains herself on the new IBM mainframe. An expert in analytical geometry, Katherine Goble (Taraji P. Henson) is assigned to the Space Task Group, which will calculate trajectories for John Glenn’s Friendship 7 capsule; it is a big room of white men, dismissive of her race and gender.

Beyond work, there are church picnics and family dinners, and Goble gets a romance with a handsome Army colonel (Mahershala Ali). In the wider world, there is the anxiety and excitement around the space race, as well as the increasing drumbeat of the civil-rights movement. Nobody is truly awful to the women, but neither does anybody notice or care that the women’s opportunities are hampered by institutional racism. Except Al Harrison (Kevin Costner), Goble’s boss, who gets lightly woke and bucks a few rules, because he’s the kind of pragmatic square-jaw who simply wants the best person for the job.

And while this specific history may be unfamiliar, no viewer will be surprised by how the film plays out. Hidden Figures follows the formula of inspirational bio-pics — a pastiche of homey scenes, on-the-nose dialogue and/or speeches and genuinely interesting moments. It’s the quiet fierceness the actresses bring to these roles that make the work compelling.

And though it’s a generic inspirational underdog film, it’s worth seeing. It’s a good time to take note of unsung pioneers, and to process the realities of how hard it is to succeed when the system is rigged. And yet, these women make it, using determination, perseverance and polite pushback (realistically, their only available tools). Be sure to stick around for the credits that offer snapshots of the actual women and give an update on their careers; Katherine Goble (now Johnson) received the Presidential Medal of Freedom in 2015. And take the older kids, who will learn that once computers were people, and that it’s worth fighting for a place in history.