Clint Eastwood puts a spiritual wrinkle (kinda) into his somber rumination on death and afterlife. 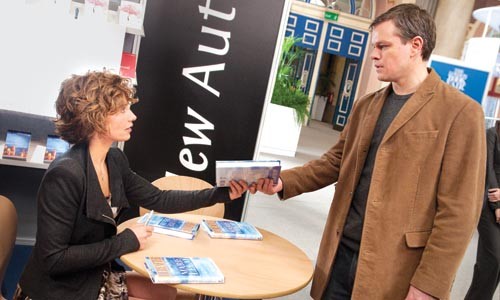 There are several ways into Clint Eastwood's new movie, Hereafter, and several places to move around inside it once you're there. But I'm still not sure if that means it's complex and challenging, or just a pastiche of banalities. One thing's for sure: Its first 10 and final 20 minutes are its most interesting. Considering it's a movie about life and death, that has to be a metaphor for something.

Eastwood is 80 now, which might lead you to wonder whether he's thinking about his own personal end-game. Well, poppycock: This is an artist -- I use that term as a courtesy title, sort of like calling a preacher "reverend" -- who's traded in death from the beginning.

His two early icons, the Man with No Name and Dirty Harry Callahan, killed with stoic pleasure, and he won his first Oscar for directing Unforgiven, a movie about a man who killed for a living. Most of his recent movies have revolved around death in one way or another: In Gran Torino, his character commits vigilante suicide, and in his best work, Million Dollar Baby, he pulls someone's plug. So let's not try to argue that Eastwood has become obsessed with death because he's so much closer to his own.

Hereafter looks and feels like most of Eastwood's movies of the past decade or so: slow, solemn, lugubrious and photographed in a palette of drab fading colors. If death looks like something, then this could be it.

The story takes place in three cities. In San Francisco, George (Matt Damon), an authentic psychic (as opposed to the frauds we also see), refuses to use his gift of communicating with the dead because it consumes his life. In Paris, Marie (Cécile de France), a popular political TV journalist, struggles to understand the visions she's having after surviving a tsunami while on vacation. And in London, Marcus (Frankie McLaren), the quiet young son of a loving but struggling substance-abusing mother, can't get past the death of his gregarious twin.

Hereafter moves back and forth between them, and you know they'll all come together somehow. Their ultimate medium is Charles Dickens (don't worry: not literally), and in the movie's climax, they meet at the London book fair, where George has fled to escape his businessman brother (Jay Mohr), who's pushing him to become a psychic again, and where Marie gives a reading of the book she finally writes about life after death. To call their coincidental confluence Dickensian would be stretching things a bit. And yet, that seems to be what Eastwood and his screenwriter, Peter Morgan (The Queen), have in mind.

Hereafter opens with a horrific scene of destruction, as a tsunami's wave destroys a town and thousands of defenseless people. We watch Marie flee, and then die with a grisly crack to the head. Only she doesn't die -- except she did, she's later told by a scientist who's come to believe that the afterlife is a real and consistent place. This is a little surprising coming from an avowed atheist -- I mean the scientist, but Eastwood seems to be a kindred spirit -- although as usual in an Eastwood movie, it's all just superficial talk. He never has much to say about his films' ideas, running more on instinct than intellectual prowess.

If one idea emerges here that's even slightly startling -- at least for a mainstream film -- it's that religion has the afterlife wrong and God has nothing to do with it. Tell us something we don't know. Every 15 minutes or so, Eastwood presents a scene that's especially chilling or moving, but only because death and its concomitant sadness always seize our emotions and focus our attention. It may seem odd that Eastwood has made a supernatural film after half a century of being so down to earth. In fact, he's always traded in fantasy fulfillment and allegory, unless you believe that Dirty Harry is somehow even remotely "realistic."

The acting in Hereafter is quite effective and comfortable, although Bryce Dallas Howard, as a young woman in George's cooking class who takes a liking to him, sometimes works too hard at being ditzy and damaged. And Damon is probably the perfect choice to realize George: No matter what the role, Damon seems to play it organically. I'm just never sure whether he's a wonderfully subtle actor or his generation's Rorschach test. In English and French, with subtitles.