Heralded painter Michael Williams on his new show at the Carnegie

“I was just experimenting with a new tool.” 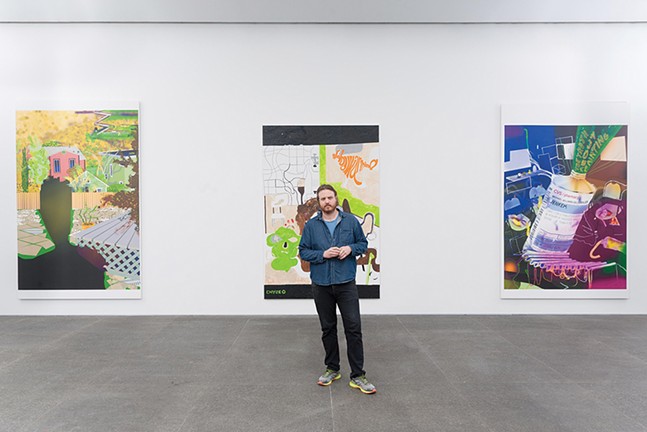 continues through Aug. 27. Carnegie Museum of Art, 4400 Forbes Ave., Oakland. 412-622-3131 or cmoa.org
A revolution happened under our noses; it wasn’t televised, but rather torrented and Photoshopped. Heralding this new painting is Michael Williams, an artist whose work makes a case for ars gratia artis, using unique practices: The Los Angeles-based artist makes paintings on top of print-outs of digital drawings, constructed and deconstructed, frosted with oil paint, all in hallucinatory color. If there’s a conversation embedded in the work, an embodied meaning from the heart of the artist, it appears to be that the modern painter’s life is a little absurd and weird and wonderful, and certainly technologically enhanced.

At the Carnegie Museum of Art, Williams now has a suite of paintings in the Forum Gallery, and a series of drawings in the Scaife Gallery. Williams is widely celebrated — his work graced the cover of April’s Artforum — but Michael Williams is his first U.S. solo museum exhibition, with all new paintings created specifically for this show. Curator Eric Crosby has been following Williams’ work for years, since his early shows with CANADA gallery in New York’s Lower East Side.

“Originally I asked [Williams] to think about an exhibition that takes [his] use of ink-jet printing to the next level,” Crosby said last week, shouting above the sounds of the still-in-progress installation. “There are works in the exhibition made entirely in a digital environment, that Michael prints onto canvas using a large-scale commercial printer. A lot of those works he subsequently re-attacks, using the materials of a traditional painter’s studio. I was really interested in the conflict there: the challenge that an image produced within a digital environment, and then printed, poses to our conventional understanding of what a painter’s work is.”

“For a long time I’d been wanting to make drawings in the computer, and finally I got the tools,” says Williams. “At first I wasn’t thinking that I was working on paintings, I was just experimenting with a new tool. Simultaneously, I had been scanning some collages and having those printed, and painting on top of those. At a certain point it occurred to me I could print out these computer drawings. I started doing that, and that was really exciting to me. It was a self-challenge, because for a long time I had a relationship with painting in a sort of expressive, invested-in-the-medium, type of way.”