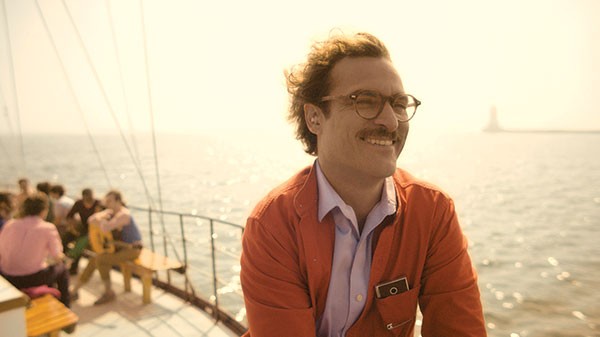 We casually profess our love for Google maps, Minecraft, the unseen miracle that brings us Tumblrs of cats — but what if we really loved these software configurations and they loved us back? Exploring the fungible space between humans and the technology they embrace is Her, a bittersweet love story written and directed by Spike Jonze (Adaptation).

Set in a near-future Los Angeles (played by Shanghai), Her's everyman is Theodore (Joaquin Phoenix), a sensitive, withdrawn soul who works composing hand-written letters. Then he installs a new operating system for his devices which is artificially intelligent, intuitive and "understands" him. It speaks in a lively female voice (supplied by Scarlett Johansson), and the more one interacts with it, the better it adapts to one's needs. Theodore names it "Samantha," and the two quickly connect. They talk, flirt, take trips, have a sexual relationship. Theodore explains humanity to Samantha, and her skills help him grow more secure and confident.

Theodore falls in love with Samantha, and he's not the only one. His neighbor, Amy (Amy Adams), also has a relationship with an operating system, and the streets are filled with folks attuned to the robot voice in their earpieces. Yet despite all this accommodating technology, people long to connect with each other, if even clumsily: Amy finds comfort in filming her sleeping mother, and Theodore misses the irony of his job, where his for-hire letters produce profound emotions between unseen strangers.

Her depicts a world where intimacy is most easily explored and sustained through the artificial. (Theodore's ex-wife tells him: "You always wanted a life without the challenges of anything real.") But it's not that simple: Turns out that opening up to one's OS creates its own emotional vulnerabilities, and artificially intelligent beings like Samantha aren't immune to existential debate, either. ("Are these feelings real, or are they just programming?")

Throughout, Her juggles a tricky concept that seems in danger of tumbling into twee pretentiousness. But Phoenix and Johansson sell it — you believe in their improbable love affair. A tip of the hat, too, to the production details which help sell the film's engaging contradictions: its look the crisp haziness of a dream (or modern Chinese city on a bad-air day); the slightly offcolor palette; and a wardrobe best described as frumpy futuristic. And Her sticks the landing, winding up in a place both surprising, logical and wistfully open-ended.

Initially, Theodore seems laughable, pitiable — what kind of loser falls in love with a bit of technology? But query your own commitment to various devices and programs. Her's exploration of these beguiling and problematic relationships will linger with you, not least when you reach for your iPhone. Again.