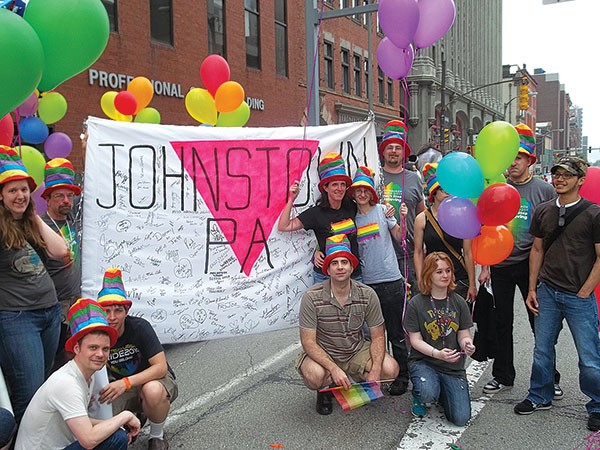 John DeBartola (at right, kneeling before banner) at Pittsburgh Pride 2011
Applications for the Miss Pittsburgh Public Access Pageant are available by contacting

keystoneallic
ancegaylifenews
letter@hotmail.com,
and will be accepted until 5 p.m. Fri., April 26. The pageant will be held at PCTV's studios from 11 a.m.-4 p.m. Sat., April 27.

A small number of audience tickets are also available; a donation of at least $17 for the Trevor Project is suggested.

Everywhere you look, people are changing their minds about gay marriage, and publically supporting LGBT loved ones and neighbors.

Well, maybe not everywhere you look.

"I go to a small rural school outside Pittsburgh where the population is 99 percent white and 99 percent straight. ... I also get bullied a lot. Not physically, but verbally. ... But they hurt all the same."

So begins a letter posted online by the Trevor Project, a suicide-prevention group focused on LGBT youth. And it's a story familiar to many Pennsylvania LGBT advocates, who say progress has come slower in some places than others.

In rural areas especially, says John DeBartola, LGBT youth "have to be tremendously cautious [about] exposing themselves to a lot of hatred and discrimination, because it is much more difficult to seek or get assistance."

That's not for lack of trying. An acclaimed 2010 documentary, Out in the Silence, explored the hardship of being gay in Oil City, and small towns like it. But when DeBartola's Johnstown-based group, the Keystone Alliance/Gay Life newsletter, sought to screen the film for then-Congressman Mark Critz and his Republican opponent that year, they got no response — even when the filmmakers and other elected officials took up the cause.

It's "unfortunate that an elected individual cannot take a stand," says DeBartola.

So in rural areas especially, LGBT youth end up standing on their own. That's why, when DeBartola organized this year's Miss Pittsburgh Public Access Pageant on cable channel PCTV, he dedicated the event — and any proceeds from it — to the Trevor Project itself.

Spawned by the 1994 film Trevor, about a gay high-schooler in the Bible Belt, the project began as a suicide-prevention hotline for LGBT youth. It now also hosts trevorspace.org, an online network with 60,000 members age 13-24, says Trevor Project communications director Laura McGinnis.

"You can come from a town of 200 people, and be the only person you know of that is not straight, and find other people who face the same challenges," she says. "They might live down the street, or in Iran." Conversely, she says, finding a support group across town often "requires access to a car. And that's not always easy, especially if you don't have accepting parents."

DeBartola's partner in the pageant, Brian Tee, has been informing viewers about Trevor on his own PCTV show, Brian T World. Tee says he was once contacted by a teen-age viewer "in crisis": Tee recommended he contact Trevor Project, and the teen "has kept in touch with me since," Tee says. "Kids like him have been an inspiration."

But not every town has a gay-news program on local TV. And only 30 Pennsylvania municipalities have anti-discrimination laws. Nearly two-thirds of Pennsylvanians, especially those outside larger cities, live without such protection, says Liz Bradbury, of the Allentown-based Pennsylvania Diversity Network.

"When you don't have a law like that," she says, "young people don't see anybody saying they shouldn't be discriminated against." Nor do they always get that message from school officials, who can be hostile to efforts like establishing gay-straight student alliances. Barring such groups is against the law, she notes, but in rural areas especially, teens "don't have someone to tell [school officials], 'You can't do that.'"

"Pennsylvania is slightly behind the rest of the nation" on LGBT protections, sighs Ted Martin, who heads Equality PA. "West Virginia has more advanced LGBT-bullying laws than Pennsylvania."

Trevor isn't the only LGBT resource in rural areas, of course. PFLAG, an advocacy group for LGBT people and their supporters, has 15 chapters statewide, including locales like Lancaster and Indiana County. DeBartola's Keystone Alliance/Gaylife Newsletter, meanwhile, has been offering online content since 1999. It's also been active within and beyond its Johnstown base, with activities ranging from sponsoring Halloween Parade floats to Trevor Project LGBT-awareness workshops.

"Rural areas are awakening," says DeBartola. Even drag shows, he says, show "the changing of the tide. More and more people are realizing that ... they are a form of artistic expression."

And while drag shows may not be political debates, PCTV's pageant will be judged by Pittsburgh mayoral candidate AJ Richardson. (Richardson says DeBartola "asked me if I'd be a judge, and I said, 'I'd be honored.'") In any case, says Tee, even someone "who has never given a second thought to the struggles of our LGBT youth just might watch and end up sending a donation."