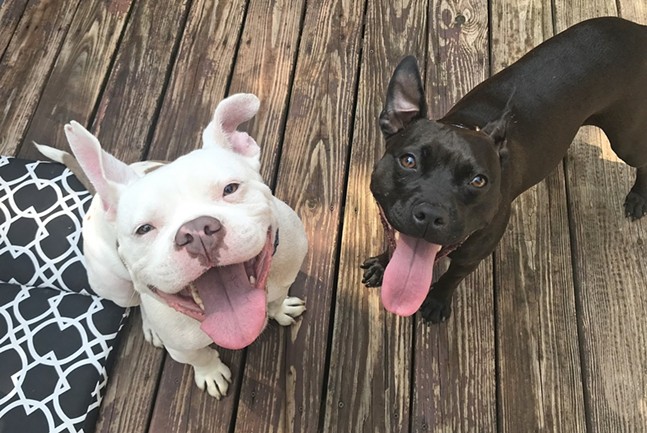 Photo: Hello Bully
Hello Bully rescues Professor Stanford P. Marshmallow (L) and Batgirl (R)
When Daisy Wise lost her beloved American pit bull terrier, she was left with heartbreak over the loss of her companion, as well as displeasure with the negative perceptions surrounding the breed. In 2005, Wise took her sadness and anger and founded Hello Bully, a nonprofit she describes as “a pit bull rescue and so much more.”

The organization rescues pit bulls, runs a spay and neuter program, and hosts the Pittsburgh Pets Community Outreach program, which helps hundreds of dogs and cats throughout Pittsburgh each year. (It has also been voted Best Nonprofit multiple times by Pittsburgh City Paper readers.)

Since starting and becoming president of Hello Bully, Wise has welcomed Hello Bully alum Batgirl, a dogfighting survivor rescued from Mississippi, into her family.

The volunteer-driven organization often hosts fundraisers to help finance the care of its rescues and various programs. On August 4, Hello Bully hosts Love-a-Bull Ink tattoo fundraiser in partnership with the Pittsburgh Tattoo Company.

“If you’ve never been to Pittsburgh Tattoo Co., it’s a great space with lots of room to hang out while you wait to get tattooed," says Wise, calling the fundraiser a "kick-ass mash-up.” During the event, guests will get to choose from a number of dog-inspired flash tattoos for $75.

Wise adds that the event will include appearances by "Official Hello Bully Spokesbull" dogs, including Professor Stanford P. Marshmallow. There are also VIP packages allowing guests to skip the lines and be the first to pet the Spokesbulls, along with other perks.

For Wise, who has been a pit bull owner for over 20 years, helping out the misunderstood breed is vitally important. As the preferred breed for dogfighting, pit bulls face a stigma that blames the dog as opposed to the owners who train them to be vicious. This preference has clear consequences, as past Allegheny County Health Department reports cite pit bulls as one of the major breeds responsible for dog bites (one from 2015-2016 says they accounted for about 14 percent).

Such statistics have led to discrimination, with over 900 cities throughout the U.S. passing breed-specific legislation against pit bulls. In July 2018, Delta Airlines even banned "pit bull like" service dogs from flying with their owners.

However, local animal rights advocates like Hello Bully and law enforcement have worked to undo the breed's bad reputation through education, and by cracking down on dogfighting rings and abusive owners. In Pennsylvania, this extends to a 2017 animal cruelty prevention bill signed by Gov. Tom Wolf that, among other things, increases penalties for animal abusers and protects veterinarians, veterinarian technicians, and humane society police officers from being sued if they report abuse.

As for Hello Bully and its supporters, Wise says the response to the Love-a-Bull Ink event "has been wonderful,” claiming they sold all 12 of the available VIP packages.

“Dogs seem to bring us together in a very special way. There are always stories, pictures, laughs, and tears when we share stories about our dogs,” says Wise. “So, aside from all the fun and swag and ink, come for the community.”