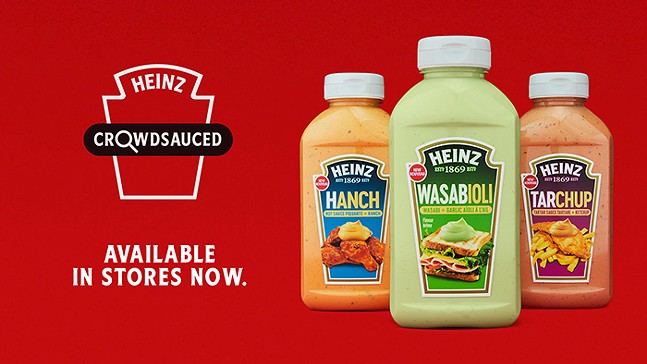 Photo: Courtesy of Kraft Heinz Canada
Three new condiments available only in Canada
Pittsburghers were quick to mock locally-based food giant Heinz when it debuted some new condiments in 2018. The names of those new concoctions (Mayochup, Mayomust, and Mayocue) were a bit unorthodox, but the condiments were basically just versions of aioli, as the company mixed ketchup, mustard, and barbecue sauce with mayonnaise.

Now, Heinz is at it again with some newly concocted condiments, but they are only available in Canada. Pittsburgh will have to wait to mock these condiments for now, but there might actually be nothing to mock this time because they look amazing. (Maybe this is Heinz’s way of punishing Pittsburghers for not supporting their modern foray into new condiment variations.)

Canadians get to enjoy Tarchup, Wasabioli, and Hanch. The condiments are named like the aforementioned American condiments, and combine two sauces into one. Tarchup is a combination of tartar sauce and ketchup, and honestly sounds perfect for a Pittsburgh fish fry. (Also, Thousand Island dressing is basically tartar sauce mixed with ketchup, so Tarchup would also probably go good with a cheeseburger.)

Wasabioli combines wasabi with a garlic aioli and sounds like a perfect accompaniment to a cheesesteak or curly fries. And Hanch is a mix of hot sauce and ranch dressing, and seems tailor-made for pizza. (It feels like Pittsburghers probably already use this combination with pizza, anyway.)

Alas, these condiments are only available in Canada. According to a press release, the new condiments were inspired by social media users' run ins with different condiments, like a woman who posted to an online forum asking how to remove a wasabi and garlic aioli stain on her mother's vintage dress, and a man who shared his hot sauce-ranch recipe to a pizza subreddit.

“Little did they all know … Heinz was watching,” reads the press release. “Heinz surprised each sauce creator by making their creations a reality, and then worked with them to bring their sauce to the Canadian marketplace.”

Pittsburghers — who unabashedly love Heinz ketchup, even if they are wary of some newer creations — aren’t left with only the mayo-variations to try. Heinz has also added Kranch (ketchup mixed with ranch), Honeyracha (a mixture of sriracha chili sauce and honey), and Mayoracha (mayonnaise and sriracha) to American shelves.

It’s unclear when, and if, Pittsburgh and American markets will see Tarchup, Wasabioli, and Hanch, but maybe some social media activity about the new Canadian condiments will inspire the hometown company to bring them down from the Great White North.