Visitors and students might not know that the Heinz Memorial Chapel at the University of Pittsburgh is non-denominational. The chapel’s associate director, Wendy Lau, says that the Heinz family “never thought that you should hold one religion over another.

“They wanted everyone to feel welcome and inspired,” she says.

If visitors take a moment to inspect the 23 stained glass windows in the chapel, they may see another notable, yet obscure aspect: the many women pictured in the glass, all of whom represent not only religion, but science, literature, activism, and other fields.

The chapel spotlights this in March with Women in the Windows, a guided tour that celebrates Women’s History Month. The chapel is expanding the event after presenting a limited, experimental version of it over the past two years.

In that time, Lau saw the potential of the tour when she noticed how people reacted to learning that an equal number of men and women are featured in the 73-foot-tall transept windows above the altar.

“Their mouths drop,” says Lau, adding that it’s especially surprising given that the chapel was built 81 years ago.

Lau believes the female-focused tour also makes sense given how the chapel came to be. Dedicated in 1938, the building memorializes Anna Margaretha Heinz, the mother of the man who founded his now-global food manufacturing company in Pittsburgh. The chapel windows were designed by Charles Connick, who, as Lau points out, has works in 47 states throughout the country, including St. Patrick’s Cathedral in New York City, as well as abroad. The windows were made in the medieval style, resulting in what Lau calls a “riot of color,” particularly blues.

Leading the tour is chapel docent and events coordinator, Karen Sebolt. As a Girl Scout leader, Sebolt originally organized Women in the Windows when she struggled to find Women’s History Month events for her troop to participate in. (The tour is now featured on the Girl Scouts of Western Pennsylvania website as part of its patch program.)

While many of the women among the windows’ 391 identifiable figures are well-known, including poet Emily Dickinson and Joan of Arc, Sebolt uses the tour as an opportunity to spotlight some of the more obscure figures. For example, she says one subject, Elizabeth Fry, became an early advocate for prison reform in the 1800s after witnessing how badly prisoners, especially incarcerated women and children, were treated at facilities like England’s Newgate Prison.

Sebolt says that doing research encouraged her to “dig a little deeper” and find “little fun things” about each woman. When looking into Hannah More, a playwright who also taught children in England’s poor mining communities, she found out they were mining limestone, one of the materials used in building the chapel.

In getting to know Ruth, one of two women with Biblical texts bearing their name, Sebolt decided to calculate how many miles Ruth and her mother-in-law, Naomi, walked during her epic journey from Moab to Bethlehem. (It’s about 1,800 miles, or approximately the distance from New York City to Denver, Colo.)

Sebolt says she also adds in history about women at Pitt and about the chapel itself during the tour. 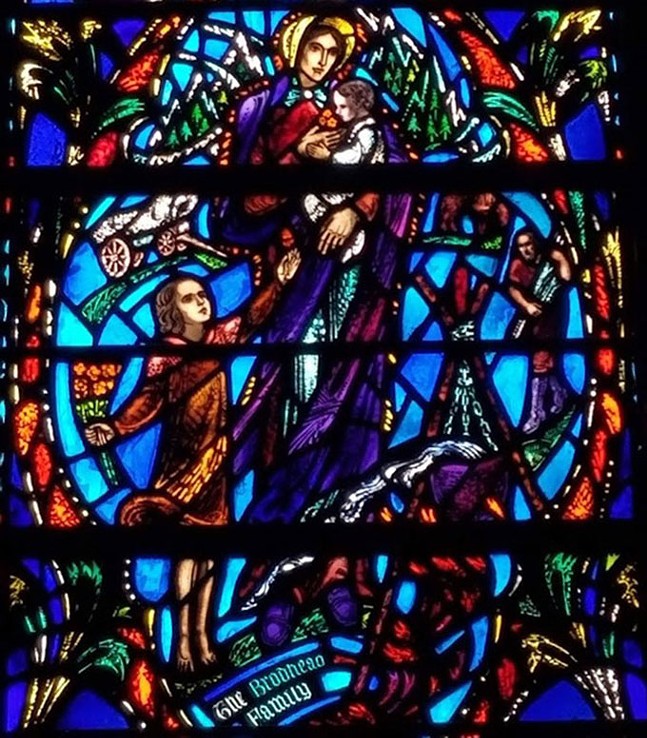 Music will also play a major role as both a part of and in conjunction with Women in the Windows. Sebolt says she plans to end tours by playing prerecorded music by female composers on the chapel organ. The chapel, which traditionally hosts a number of concerts throughout the year, will spotlight primarily women artists throughout March, all of whom plan on playing music written by women.

Sebolt and Lau hope the tour both introduces visitors to notable women throughout history and boosts public appreciation for the chapel, which lives in the shadow of the nearby Cathedral of Learning.

“People know about the Cathedral and head over there and then they kind of look across and say, ‘What’s that chapel?’” says Lau.

But, with the tour, she wants people to view the chapel as more than a place to worship or get married.

“Stained glass is art,” says Lau, “and I really think of the chapel as a work of art.”