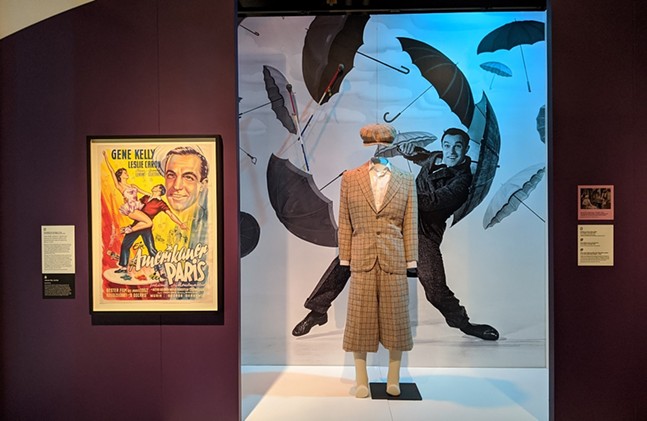 Opening Wed., July 1, the new show features an array of artwork depicting musicians, activists, industrialists, and others with connections to the city and Western Pennsylvania. Described as one of the largest loans from the National Portrait Gallery, it contains more than 100 pieces of Pittsburgh-related figures, all identified by lead curator Leslie Przybylek.

The exhibition also includes relevant items from the History Center's own collection, including the dagger used in Henry Clay Frick's assassination attempt (encased next to a profile portrait of him and his wife, Helen) and a plaid suit worn by Pittsburgh-born dancer/actor Gene Kelly in the film Singin' in the Rain.

The definition of “portrait” becomes broader throughout the show, including in a hyper-local section The Power of a Portrait, where visitors will find pieces like a parking chair featuring a caricature of former Pittsburgh Mayor Tom Murphy, as painted by Pittsburgh Post-Gazette political cartoonist Tim Menees.
click to enlarge 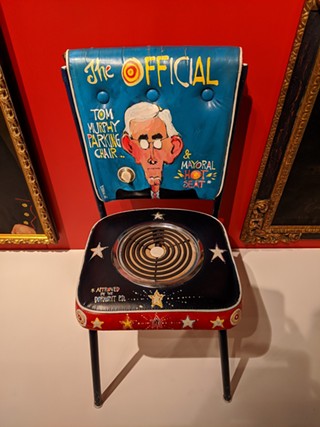 
As Przybylek tells it, the exhibition, which was set to open in late March and has been languishing for months, made it just under the wire before shipments out of the gallery were halted.

“We were almost ready to open when everything just shut down in the world,” says Przybylek during a preview event.

Since then, the team has made design changes to accommodate social distancing. This includes the spacing between the several portrait-inspired setups where visitors can be photographed singing into an old microphone like Pittsburgh-born bandleader Billy Eckstine or posing like modern dance pioneer Martha Graham, whose stunning, stylized oil portrait by celebrated social realist painter Paul Meltsner hangs in the gallery labeled On Stage & Screen.

Besides On Stage & Screen, the six galleries, all situated along an arched corridor meant to simulate the feel of the National Portrait Gallery, are organized to reflect the contributions made by their subjects. Restless Lives, for example, showcases the “social activists and crusading journalists” who came out of or made key developments in Pittsburgh. Among them is an installation featuring a dress belonging to and lithographs of Lillian Russell, the famed stage actress who championed women's rights and suffrage in Pittsburgh in the early 20th century. 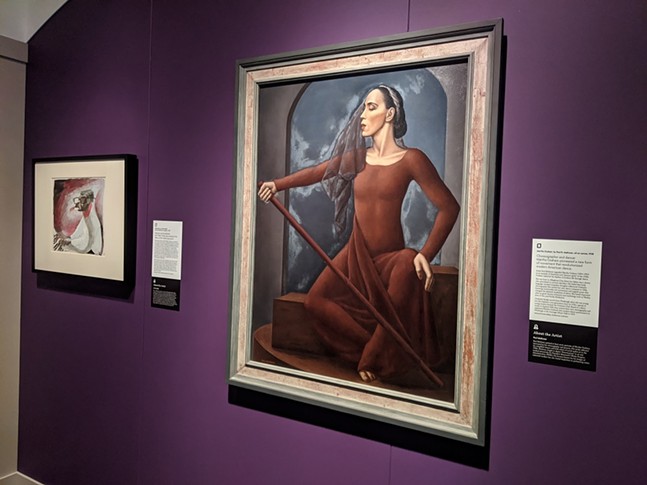 CP photo: Amanda Waltz
Martha Graham (right) and Earl "Fatha" Hines (left) at Smithsonian’s Portraits of Pittsburgh: Works from the National Portrait Gallery
The section on Pittsburgh industrialists and institutional namesakes (of which the Center is more than acquainted with) reflects one of the primary missions of the show, to shed light on the complicated legacy of its subjects as opposed to blindly revering them. Stately, grandfatherly portraits of Henry Clay Frick, Andrew Carnegie, and Andrew Mellon are often juxtaposed with parody art and other work reflecting the public's mistrust in these influential men, whose exploitation of workers and violent union-busting efforts are well documented. As if to drive this home, the show also includes images of those who fell victim to industrial collapse in Pittsburgh and the region, including an evocative portrait of a coal miner by Birney Lettick and the painting Unemployment by Wilson McLean.

The effort is evident in other areas of the exhibition, including for Jane Grey Swisshelm, a 19th-century women's rights pioneer and journalist who, as an informational placard next to her painting points out, was especially hostile toward Native Americans and called for the demise of the Dakota Sioux after the bloody Dakota War in 1862. (It should be noted that, while fellow suffragette Russell fought for gender equality, she was also staunchly anti-immigration and was instrumental in creating legislation that banned migrants from Asian countries.)

While necessary, some of the focus on the corruption that came with the region's prosperous age also reflects certain prejudices of the time – one cringeworthy Life magazine cartoon mocks Carnegie's heritage by portraying the steel magnate wearing a Scottish kilt and tam o'shanter while tossing money into the air.

Przybylek speaks to this goal of the exhibit, saying, “The National Portrait Gallery's mission is to portray the story of America, presenting portraits of people whose lives have impacted the history, development, and culture of the nation. It's not a hall of fame. Some of those impacts are not necessarily all positive, and in fact, the exhibition here is the same way.”

She adds that the exhibit provides an opportunity to contribute to an “ongoing dialogue about the nature of portraiture and legacy and impact in America,” especially in regards to representation. For example, she points out the National Portrait Gallery collection is only 18% women. As a result, the show is encouraging visitors to suggest people they believe should be considered.

“Throughout this exhibit, we're not just looking at who is here, but who is not,” says Przybylek.