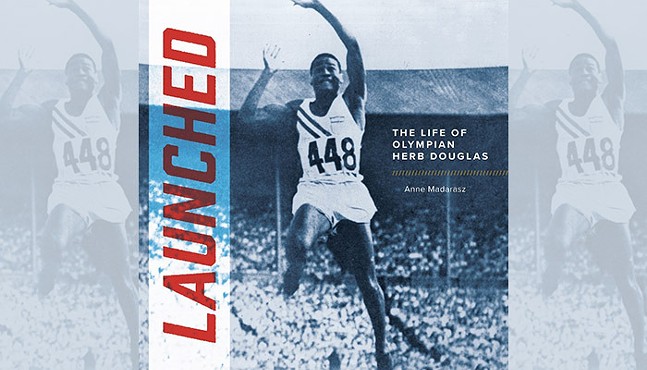 Photo: Courtesy of Heinz History Center
LAUNCHED: The Life of Olympian Herb Douglas
The Heinz History Center is dedicated to showcasing the people, places, and innovations that have made Pittsburgh into the city it is today. Now, the Smithsonian-affiliated institution has won an award for a book about one Black Pittsburgh native who made strides in both sports and business.

The History Center has announced that its book LAUNCHED: The Life of Olympian Herb Douglas was awarded the Gold Medal for Diversity, Equity, & Inclusion in the Research Projects/Publications category at the inaugural Anthem Awards. Douglas won a bronze medal in the long jump at the 1948 Olympic Games in London and went on to become one of the first African-American vice presidents of a major U.S. corporation, the wine and spirit importer Schieffelin and Somerset Co.

Douglas, who will turn 100 on March 9, is also credited as currently being the oldest living Black American Olympic medalist.

Published in 2019, LAUNCHED was written in partnership with the Center’s African American Program and Western Pennsylvania Sports Museum. The book was written by Anne Madarasz, who serves as the chief historian and director of the  Sports Museum. It includes 90 archival photographs, and commentary from athletes who know or were mentored by Douglas, including a forward by Steelers Hall of Famer Franco Harris.

“We’re grateful and honored to be selected by the International Academy of Digital Arts & Sciences as its inaugural winner in the Diversity, Equity, & Inclusion for publications category,” says Madarasz in a press release. “As Herb prepares to celebrate his 100th birthday on March 9, we can’t think of a better birthday present for him than to shine an international light on his incredible story.”

Founded in partnership with the NAACP, Born This Way Foundation, Feeding America, GLAAD, and other organizations, the newly created Anthem Awards are described as being developed to “recognize the breadth of social good work (online and offline) around the globe by honoring the organizations, brands, and people creating long-lasting impact.”

“It is our distinct honor to recognize the work that brands, organizations, and individuals are all making to create an impact in their community,” adds Jessica Lauretti, managing director of the Anthem Awards. “We launched this platform to show the world that all corners of our culture, from sports and entertainment to business leaders and celebrities, are all standing up to say, it is time for systemic change and that social good is what we value as a society.”

All winners will be celebrated Mon., Feb. 28 at the first Anthem Voices Conference, followed by a “star-studded virtual awards show” hosted by Jay Ellis, star of the HBO series Insecure.