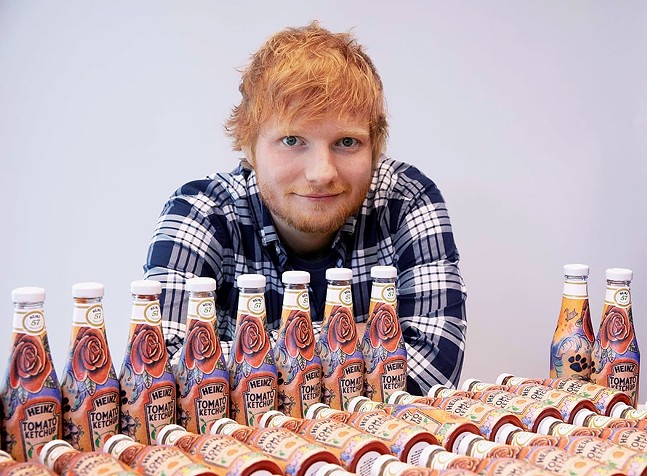 Photo: Heinz
Ed Sheeran and his ketchup offspring
In June, Heinz released an ad featuring singer and movie star Ed Sheeran. The ad, which was supposedly pitched by Sheeran to Heinz's through Instagram DMs, features the singer dining at a restaurant so fancy and snooty, that the waiter, chef, and other patrons are horrified when Sheeran whips out a bottle of ketchup from his backpack. The message: ketchup is for regular people, just like Sheeran, who, like most people, dresses poorly and wears glasses.

Along with the ad, Heinz announced that they would sell a collaboration between Sheeran and their ketchup in the form of a regular ketchup bottle with a label that says "Tomato Edchup" with a picture of a floppy-haired tomato wearing glasses.

Photo: Heinz
Gotta have my Edchup
On Aug. 12, Heinz and Sheeran announced yet another collaboration: a very limited edition ketchup bottle covered in replicas of Ed Sheeran's tattoos.

Heinz will make 150 of the bottles; 104 will be given away via a sweepstakes and three will be auctioned off at New York auction house Christie's, according to Adweek. (No word on what happens to the other 43 bottles).

The "reason" Heinz did this is because Sheeran, who loves ketchup, has a Heinz logo tattooed on his body. Sheeran reportedly got the tattoo during a tour stop in Ohio, which is not the birthplace of Heinz, but it's entirely possible Sheeran doesn't know that. There's no reason he would know the difference between Ohio and Pennsylvania.

The bottle is an interesting choice, however, because Sheeran has notably terrible tattoos, which look like someone let a child scribble on the walls of their house (technically, Sheeran's body is his house.) The Heinz bottle features a rose and some puzzle pieces, but Sheeran's other tattoos include "Galway Grill" — a misspelling of his song "Galway Girl"— a teddy bear, and a giant lion on his chest.

Anyway, if you want to enter a contest to win a bottle of ketchup designed to look like it's wrapped in Ed Sheeran's skin, you can do so here.