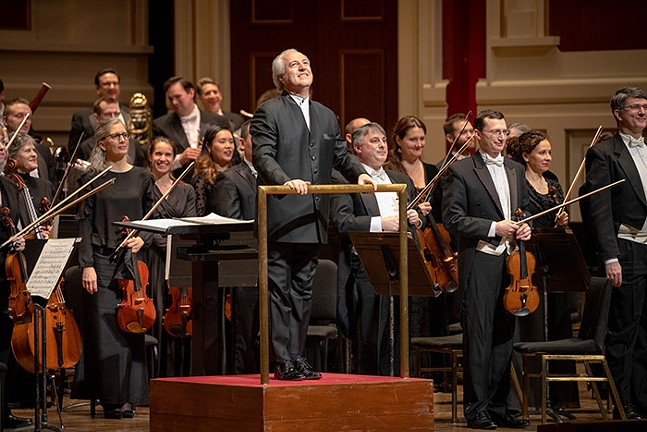 
PSO subscribers, donors, and funders gathered at the Downtown theater on Mon., Feb. 10 for the announcement of the company’s 125th anniversary season, and numerous attendees throughout the crowd could be heard talking about the well-shared piece.


“For the most part, the classical-music world is in need of conductors with broad horizons, who can guide audiences from a passive worship of the past to an active awareness of the present,” wrote Alex Ross, The New Yorker’s music critic, in the article. “But we also need conductors who know how to revitalize the grand tradition — and orchestras that can respond in kind. At the moment, Pittsburgh is one of the few places on the international scene where that alchemy regularly happens.”

The highly regarded review came on the heels of the symphony scoring three nominations at this year's Grammy awards: Best Orchestral Performance; Best Engineered Album, Classical; and Producer of the Year, Classical. And while they didn’t win a Grammy at the Jan. 26 ceremony, they did win several under Honeck in 2018.

For years, symphonies have been trying to discover that sweet spot between the classical and the modern in order to bring in new audiences to the theater.

“It’s no secret that classical music organizations around the country are struggling to attract new audiences — particularly younger, more diverse crowds — without scaring off the old guard that keeps the lights on,” Boston Magazine noted in a Feb. 2 piece reflecting on a recent leadership change at the Boston Symphony Orchestra and the need for symphonies to stop “playing it safe artistically.” 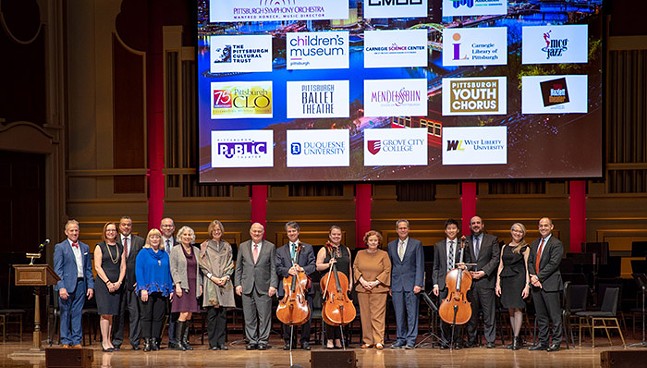 Pittsburgh Symphony Orchestra
Pittsburgh art organizations join the stage during the PSO's 2020-21 season announcement at Heinz Hall
Meanwhile, in Pittsburgh, “Pittsburgh Symphony and You: Extraordinary Together,” the PSO’s theme to its 125th season, includes some promising new programming that involves collaborations with other heavy hitters in Pittsburgh’s art scene with promises of bringing new energy to the stage.

A partnership with Pittsburgh Public Theater is easily one of the most anticipated. Before Public Theater artistic director Marya Sea Kaminski moved to Pittsburgh in 2018 to take the helm from previous director Ted Pappas, she told Pittsburgh City Paper that she was “committed to developing and showcasing new and underrepresented theatrical voices.” Audiences need only look at the theater’s current production of musical comedy Little Shop of Horrors to see an example of Kaminski’s work paying off: both on stage, and off, seats have been filled with a more diverse crowd than usual for the theater; and not just racially diverse, but also younger.

It’s a thrill, then, to see that Kaminski and the Public Theater will be one of the collaborations during PSO’s next season, joining the symphony musicians for a “newly realized interpretation of one of the greatest scores and love stories of all time,” Romeo & Juliet, in February 2021.

Another program of note is “Lift Every Voice,” a January 2021 concert celebrating the work of three local Black women, with world premieres from composer Kathryn Bostic, multimedia artist Njaimeh Njie, and text and poems from writer Jessica Lanay Moore.

Other highlights include a jazz partnership with the Manchester Craftsman’s Guild in May 2021 and “The Rite of Spring,” an October 2020 performance with more than 30 dancers from the Pittsburgh Ballet Theatre. Future collaborations include the Carnegie Museums of Pittsburgh, the Pittsburgh CLO, and the Children’s Museum of Pittsburgh.

Traveling outside of Heinz Hall this fall, the PSO will also partner with Allegheny County libraries on “Beethoven in your Neighborhood,” bringing Beethoven string quartets for free to the public at more than 20 libraries in the region.

Photo: Ed DeArmitt, Pittsburgh Symphony Orchestra
PNC Pops principal conductor Byron Stripling
One exciting in-house note that needs mentioning: Mixing up the programming within the symphony this year will be Byron Stripling, announced last month as the orchestra's new PNC Pops principal conductor. Stripling, a trumpeter, soloist, and recording artist, will begin this October with “Swingin’ at the Club,” inspired by the great music of “Harlem’s heyday when Duke Ellington's orchestra was the house band, and Cab Calloway, Ella Fizgerald, and Ethel Waters showcased the classics of the Great American Songbook," according to the season announcement.

For a full list of the 2020-2021 seasons, visit: BNY Mellon Grand Classics and PNC Pops