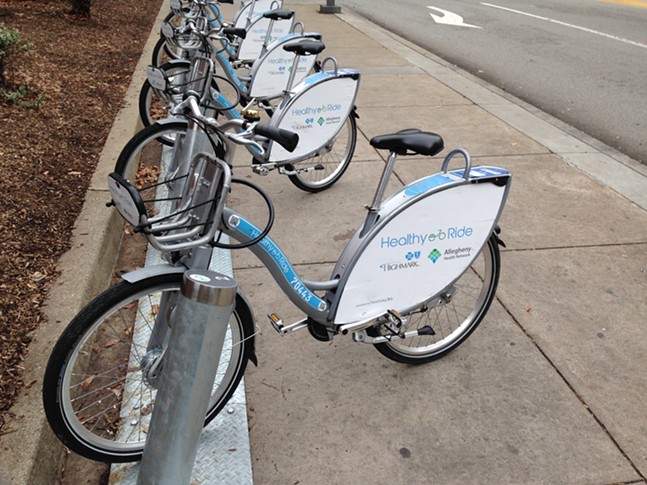 CP Photo: Ryan Deto
Healthy Ride bike-share station on Penn Avenue
Healthy Ride, Pittsburgh’s bike-share nonprofit, has seen success over the years with growing ridership and expansion into different city neighborhoods. And bigger changes are to come in 2022, likely the addition of electric-assist bicycles, aka e-bikes, to the fleet. But first, Healthy Ride will be removing some stations to prepare for those changes.

According to a Dec. 8 blog post, Healthy Ride began removing stations and kiosks last week and will continue to do so until 50 select stations are removed. The agency will still have more than 50 stations located throughout Pittsburgh after the removals are complete.

“In order to make room for things to come, we need to remove stations from the network,” reads the blog post. “We know this removal will not come without impact to our customers, but it is essential. Our goal is to consistently expand year over year and bring back more stations to your neighborhood and connect new communities to the bikeshare network in Pittsburgh.”

The 50 removed stations will be closed for 2022. Healthy Ride says it will be replacing all of its fleet with new bikes in 2022, and is using this opportunity for organizations to help the agency find new homes for the old bikes.

It’s not perfectly clear exactly what Healthy Ride’s new plans are for 2022, but signs point to the introduction of e-bikes to the fleet.

Healthy Ride has been wanting to introduce e-bikes to its fleet since at least 2019. And Healthy Ride director David White told WESA in May that the goal is to replace about 325 regular bikes with e-bikes. In March of this year, Healthy Ride announced that the Heinz Endowments had granted the agency $750,000 “to assist its transition to electric-assist bicycles.”

E-bikes have been growing in popularity. They function like normal bicycles, except that a small electric motor provides peddlers an extra boost that can help some riders reach speeds of 20 mph on flat-ground, or make it a breeze to climb a hill. 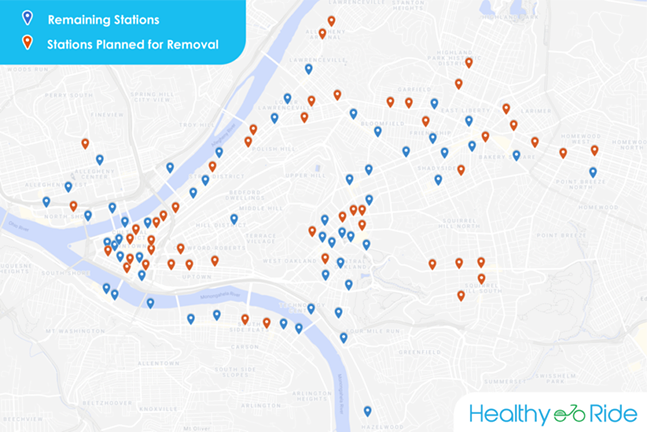 Image: Courtesy of Healthy Ride
Map of the Healthy Ride stations to be removed in 2022
The removals are concentrated in Downtown and Oakland, though both those neighborhoods will still have several stations each. It appears that Uptown and Squirrel Hill will have all of their stations removed, according to the blog post. It’s unclear if and when they will be replaced, but Healthy Ride will make an announcement in February 2022 about the agency’s plans.

The full list of the stations to be removed is listed by neighborhood below: