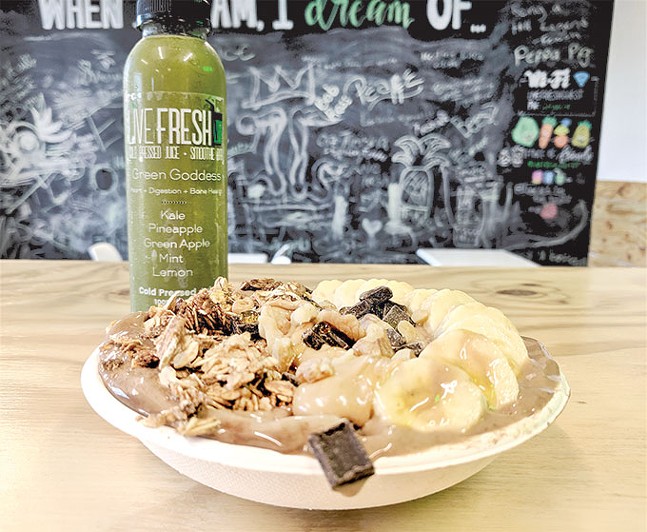 The first thing Brett Gilliam looked for when he moved to Pittsburgh was a smoothie bar. He'd moved to Homestead from Washington D.C., and once he concluded that there were none to be found in his neighborhood, Gilliam decided to open one himself.

Gilliam’s menu features cold-pressed juice made using a hydraulic press. It’s said to be a more nutritious alternative than traditional juice, which cuts fruit with blades. Slicing the fruit destroys nutrients; pressing extracts the maximum amount of liquid and saves the nutritional value.

Smoothies, bowls, and immunity shots make up the rest of the menu at Live Fresh. There are six smoothie options, ranging from a detox drink to a calorie-packed nut shake. Three immunity shots — smaller juices that include spices (typically ginger) blended with a vegetable or fruit — are available to give the body a quick boost. Acaí and smoothie bowls, the most filling options, take up four spots on the shop’s menu. And if none of the in-house creations sound appetizing, Live Fresh offers a build-your-own option for every category.

“It’s blissful, isn’t it?” Gilliam asked as I stared dumbfounded at my cocoa banana nut Bliss Bowl. He was right. It was blissful. The cocoa and frozen banana blend was topped with dark chocolate, walnuts, house-made granola, banana, and cashew butter — Gilliam first described the bowl to me as “a healthy Frosty.” The bowl was chocolatey but not too sweet, with just enough texture from the toppings to set it apart from a smoothie. It was healthy enough that I could justify eating a bowl of chocolate for breakfast.

Nine flavors make up Gilliam’s menu of cold-pressed juices. At the recommendation of the cashier, I chose Green Goddess, a blend of kale, pineapple, green apple, mint, and lemon.

I am, and have always been, a skeptic of cold-pressed juice. Juices have grown in popularity with the “clean eating” movement, a push toward extreme workouts and fad diets. Though I’m active and try to eat healthy, clean eating never really stuck with me. It doesn’t help that I've hated every cold-pressed juice I’ve tried.

Gilliam’s green goddess was different. Unlike most juices that contain greens, there was no bitterness from the kale. Instead, the juice was sweet and citrusy, like a nutritious lemonade.

The health community is still divided on cold-pressed juice. Nobody can deny the obvious benefits — each bottle at Live Fresh contains up to five and a half pounds of fruits and vegetables — but the price, an average $10-15 per bottle, and environmental impact detract from its worth as a nutritional supplement.

Gilliam, however, knows his community. All of his juices are less than $10, a steal for the quality of each drink. Baskets full of fruit hang behind the counter, free for any neighborhood child in need of a snack. He’s also teaming up with the local Little League Baseball organization to provide a box of produce for game days. Gilliam's juice bar is more than just a healthy option for his community; it’s a way for him to give back to his neighbors.

The hashtag says it all! #GetJuiced!

What do you dream of? Write it on the chalkboard in Live Fresh.

Interested in trying a cleanse? Live Fresh puts one together for you.