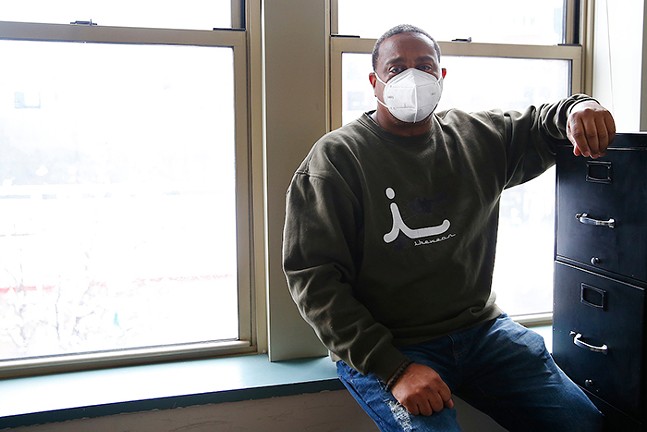 In a virtual event on Feb. 23, Gainey spoke about his plans to fight for health care workers. This pledge came as SEIU Healthcare, the largest union of health care workers in the state, voiced their official support for Gainey’s mayoral bid.

“We can’t have a thriving community unless everyone pays their fair share,” said Gainey. “It is time.”

As part of his endorsement, Gainey rolled out an economic proposal for the city that includes reinstating a lawsuit to challenge the charitable status of UPMC. The hospital giant, which has several executives raking in multi-million-dollar salaries, is technically a nonprofit, and state law allows nonprofits to avoid paying property taxes. Former Pittsburgh Mayor Luke Ravenstahl initiated a lawsuit against UPMC on the issue, but that was dropped by the administration of current Pittsburgh Mayor Bill Peduto.

During his speech, Gainey frequently referenced the “billionaire medical nonprofits,” even naming UPMC multiple times, stating that they “need to pay their share.”

“We’re going to do what we can,” said Silas Russell, political coordinator for SEIU.

After dropping the lawsuit against UPMC, Peduto started a program called OnePGH, which was supposed to acquire payment-in-lieu-of-taxes from large nonprofits like UPMC, but after years the program has appeared to go nowhere. Peduto has said a lawsuit would be contentious, expensive, and likely to fail anyways, and has noted how UPMC brought a competing lawsuit against the city the last time the city challenged UPMC's charitable status. Smaller nonprofit entities’ charitable statuses have been successfully challenged in the region and other parts of the state, but nothing on the scale of UPMC, which is one of the largest employers in the state and has considerable legal resources at its disposal.

SEIU Healthcare endorsed Gainey over Peduto in part because Peduto’s role in “undermining a fight to win a community benefits agreement with UPMC Mercy,” according to a statement. In 2018, when UPMC was seeking expansion of its Mercy hospital in Uptown, Peduto and city council backed a vote that granted a zoning variance to UPMC, which advocates and SEIU Healthcare believed was too generous to the hospital giant and didn’t provide substantial benefits for the community.

Peduto, for his part, has brought in several endorsements lately from other labor unions and many city council members, though not yet councilor Deb Gross (D-Highland Park), who voted against the zoning variance for UPMC Mercy.

Russell said the fight for fair wages, proper staffing, and respect from employers is well underway, but that Gainey’s candidacy propels the effort forward. He then turned over the floor to a series of union members and local health care workers who spoke to Gainey’s character.

“I’m a nurse, and my job is to care for my patients,” said Joni Ondra, a Pittsburgh based nurse who has 27 years of experience.

Ondra noted that her support for Gainey came from a desire to begin the “hard work of holding them [large health care corporations and nonprofits] accountable.”

Gainey feels he is ready for the challenge and commended the hard work of health care workers throughout the pandemic. “What you did during the pandemic is miraculous,” said Gainey. “The applause is not big enough.”

Dennison, a pharmacy technician at Allegheny General Hospital and North Side resident, echoed Ondra’s support for Gainey by stating he is “always in the community.”

Dennison said that Gainey can frequently be seen in her community, actively connecting with and serving her neighbors. She also said she recognizes his authentic “care for health care workers.”

In addition to her praise for Gainey, she also voiced her frustration with UPMC and other health care giants in the city, stating that the reforms she has seen at Allegheny General, whose employees formed a union, need to be matched for her peers at UPMC.

“They just need to do better for our community,” said Dennison. “We matter.”

Dennison added that Gainey’s unique abilities as a “listener” will allow him to connect with Pittsburgh’s large and ever growing number of health care workers.

“I believe Ed understands what we’re going through in this city,” said Dennison.

Despite the overwhelming praise, the desire to take on UPMC remained at the forefront of the discussion. UPMC employee Nila Payton said she is done with “UPMC’s bullying.” She hopes to see Gainey stand up for health care workers where Peduto did not. She went on to reference Mayor Peduto’s dropping of the lawsuit that challenged UPMC’s nonprofit status.

“So far [Peduto] didn’t do anything,” said Payton, who was also an early supporter of Sen. Bernie Sanders (I-Vermont).

Gainey concluded the evening by promising to fight for health care workers over the institutions they work for. He expressed his thanks to all health care workers who have served on the frontlines of the pandemic for the past year. Gainey plans to continue the fight for “human justice” throughout his run for mayor.
Pittsburgh City Paper News Editor Ryan Deto contributed to this report.