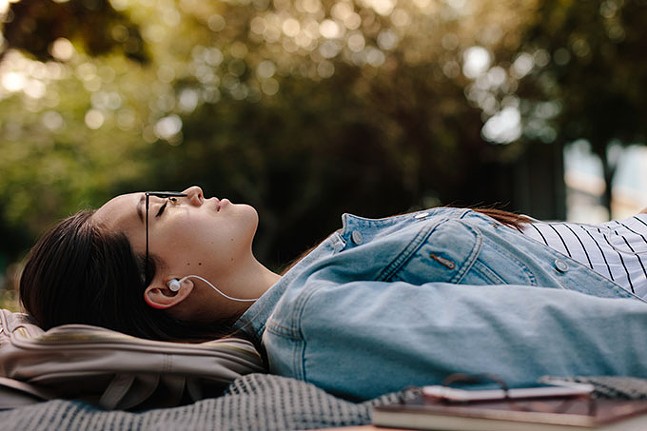 Hitting the Hay. Shut Eye. Old Dreamy Time. No matter what you call it, sleep is one of the most important factors to being a healthy, functioning person, yet many people struggle to get the recommended eight hours a night (yours truly included). But what if, instead of anxiously scrolling through Instagram and mulling over that embarrassing thing you said in eighth grade, you slipped off to the sweet sounds of Pittsburgh’s topography?

Jane McCafferty, an author and professor of English at Carnegie Mellon University, used her skills to craft and record the River City “sleepcast” as part of an event hosted by the Headspace meditation app. As reported by CMU’s Department of English, the 2,000-word work “guides listeners through a dream-space version of Pittsburgh, with myriad bridges and houses nestled into hills.”

Headspace sleepcasts are like bedtime stories that provide listeners with an auditory way to relax and fall into a restful sleep. They vary in length from 45 to 50 minutes and, like River City, usually involve a descriptive, but not over-stimulating narrative.

McCafferty debuted the piece in November during the app’s inaugural Happy Healthy America tour. The event, which took place at Oakland's Schenley Plaza, was presented in partnership with CMU and the EMBRACE Pittsburgh self-care program.

McCafferty decided to produce River City because of her own experience using sleepcasts to help alleviate her insomnia. She was a listener of the independent sleepcast, Sleep With Me, but then “started enjoying [host Drew Ackerman’s] humor too much.”

She says she’s now able to sleep without the help of drugs, adding, “I wish I could tell you why, but I'm never without an eye-mask and a podcast, and I don't use caffeine in the afternoon.”

Besides Headspace sleepcasts, she’s also a fan of other podcasts covering a variety of topics, from the poetry of The Slowdown to Ear Hustle, a groundbreaking show produced by inmates at San Quentin State Prison.

But she cautions that sleepcasts are not a cure-all for treating insomnia, as the condition is, as she puts it, often caused by an “underlying anxiety issue” that could potentially require other forms of therapy.

“Insomnia is serious, and can be devastating,” she says. “Sleepcasts are not the panacea, but a good supplement.”

Beyond the potential health benefits, she also views sleepcasts as a “nice experience” for all writers and poets to try.

“You just work with soothing images, mostly landscapes, and it's not difficult to do,” she says. “You don't have to worry about plot or character development. I think there's room for other sleep apps, and young writers might figure out a whole other way to put people to sleep with words, which is exactly what you don't want to do as a writer most of the time.”