He Who Gets Slapped

There's really nothing cheerful about Leonid Andreyev's He Who Gets Slapped, but the Carnegie Mellon University School of Drama production is so much fun to watch and listen to. Director Tony McKay (associate professor of acting) blends the sordid with spectacle in this 1915 Russian tragedy set in a "threadbare circus," a perfect arena for the unusual skills fostered in CMU dramats.

So we have acrobatics and feats of dexterity to fill in between the scenes of tangled love -- this isn't a triangle, but something non-Euclidean -- and people trying hard not to be who they are. At the center is He of the title, a man escaping from "out there" to hide in the circus. He becomes a clown whose shtick is to speechify like the bosses of the outside world, then be shut up with slaps from the other clowns, off-stage as far as our audience is concerned. All circus antics are suggested by silhouettes and sounds. We're taken behind the curtain, to their "real" lives, such as they are.

The 20-member cast is outstanding, even though most are the wrong age. In the title role, Arya Shahi looks the part of the beaten-down hero, yet sounds like a magical story-teller, and agilely carries the burdens of his mystery man. Also notable are Catherine Urbanek as a dominatrix/lion-tamer; Kailie Torres as the fluffy proto-Marilyn Monroe blonde bombshell; Alex Falberg as her oily aristocratic father; Evan T. Barron as her grotesque aristocratic suitor; Matt Nuernberger as the paternal circus manager and ringmaster; and many clowns, especially Amanda Thorp and Alexander Rice.

The dialogue, translated into English in 1921 by New York-based psychoanalyst Gregory Zilboorg (talk about your psychological insights), is witty, at times poetic, yet tries to both hide and reveal character. Some mysteries are cleared up, others deepened. The 95-year-old message that the nameless average guy is he who gets slapped is still relevant. Have fun. 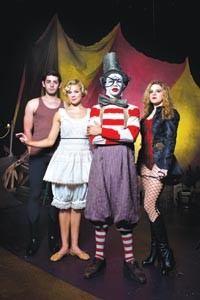 Photo courtesy of Louis Stein.
Welcome to the circus: from left, Curtis Gillen, Kaile Torres, Arya Shahi and Catherine Urbanek star in CMU School of Drama's He Who Gets Slapped.