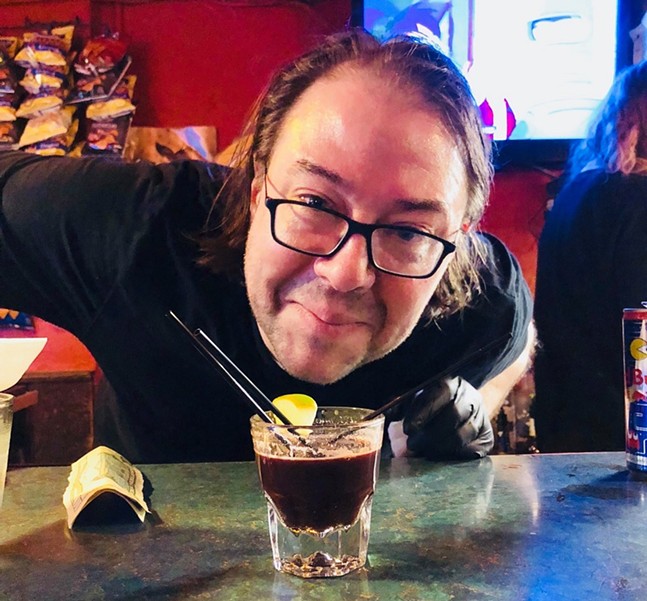 Facebook photo
Jeff Holt
Many in the Pittsburgh community are reacting to the recent passing of Jeff Holt, who made his Lawrenceville bar and restaurant, Hambone’s, a hub for local musicians, comedians, artists, and patrons.

Those who knew Holt have taken to social media to post memories and tributes of the longtime business owner and artist who welcomed many to his bar and its intimate stage area. Holt passed away on Sept. 24 of unknown causes. He was 46.

The messages range from those who personally knew Holt, to customers calling Hambone’s their “happy place” and performers expressing gratitude that Holt provided a platform for them. Over the years, Hambone's has played host to numerous musicians, bands, and stand-up comedians, as well as more off-beat acts like burlesque troupes and Opera On Tap, a traveling singing group dedicated to bringing opera to bars and other venues.


Our first night at an actual bar was at Hambone’s. Jeff Holt gave us that night. He was so easy going and supportive....


“Our first night at an actual bar was at Hambone’s,” Opera On Tap posted on Facebook. “Jeff Holt gave us that night. He was so easy going and supportive. Losing Jeff is an enormous blow to the live music community in Pittsburgh and that loss will be felt keenly.”

Mary Jo Coll worked at Hambone’s for over 10 years and says she knew Holt before he took over at the bar and restaurant in 2011, when he became partners with the longtime owner, Bill Hammill. Coll managed a lot of the entertainment booking at Hambone’s, in addition to her work at the recently closed Bloomfield venue, Howlers.

“He was a decent guy, he was dedicated to the local arts community, sometimes to the detriment of his own business,” says Coll, admitting that sometimes she and Holt had their disagreements. “As the booking manager there, he and I would fight about it often.”

Coll elaborates that the last year had been hard on Holt and, consequently, his business after the untimely death of his fiance, Jocelyn Marie Hill, who suddenly passed away in 2019 during a visit to Hambone’s. She was 43.

Hambone’s hit one snag in Dec. 2019 when the business was closed by Allegheny County officials due to delinquent Alcoholic Beverage Tax payments, but the debt was quickly paid and it soon reopened.

Coll says she handled the musical acts, while Holt “took the lead” on the comedy and burlesque troupes. She adds that Holt encouraged local artists hang their work in Hambone’s. An obituary says Holt was also an artist who “specialized in metal art, ceramics and painting.”

Amanda Averell worked with Holt as a comedian and co-owner of the Burning Bridges Comedy Club. She and fellow Burning Bridges fonder, Derek Minto, partnered with Holt to host regular open mics and performances at Hambone’s, which Averell says did a lot to support the local comedy scene.

“Jeff was an artist who created a home for comedians, visual artists, and performers across the city,” says Averell, adding that she knew Holt for six years. “Hambone's is a home to so many and that's because of Jeff. He believed so much in the comedy scene of the city and all the comedians. He made everyone feel welcome. He helped empower me. Any time someone was mistreating comics he backed me up on kicking them out of the room and throwing them out of the bar. He wanted to make sure everyone was safe, happy, and having a good time. He did everything at Hambones, he lived for it.”

Averell also remembers Holt as a “fun and silly” guy who would play gentle pranks on people. “When passing behind you he would always tap one shoulder and appear on the other side,” she says. “He thought it was hilarious.”

She recalls how Holt, who often bartended at Hambone’s, made her a special, sweet drink described as a double shot of Crown Royal Maple whiskey and ginger ale, with cinnamon sugar around the rim of the glass. He let her name the drink and created a button on the register just for her to order it.

“It was called the Double Diabetes,” says Averell. “I actually have diabetes now, too, so it worked.”

Alcohol plays a role in another cherished memory she has of Holt.

“In my first month of doing comedy and meeting him, I had a little too much to drink one night and drunkenly asked him to write me a note for work in the morning,” she says. “The note reads ‘Please excuse Amanda for being late. She was helping to support the local economy. Jeff the Bartender.’” 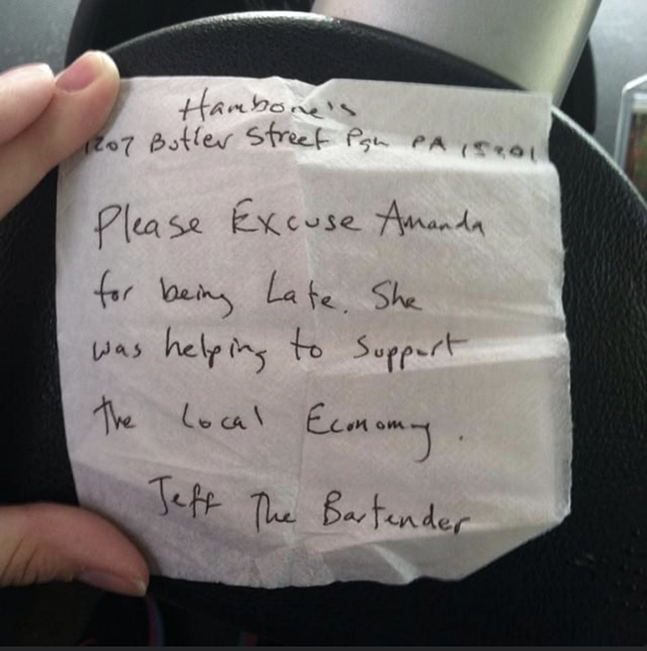 Photo by Amanda Averell
Note written for Amanda Averell by late Hambone's owner, Jeff Holt
She goes on to say she will “miss him dearly,” and that Lawrenceville, as well as the local music, comedy, art, and burlesque scenes, “won't be the same” without him.

Coll says Holt’s family and the Hambone's staff are “still working on pulling a memorial together” and are “just trying to do the things needed” to open Hambone’s again.

“We hope to be able to get back open the end of this week and keep it running while his family makes some choices about the bar,” says Coll.

Even as the future of Hambone’s remains uncertain, it seems Coll and many others will fondly remember Holt as a kind-hearted and generous figure in the community.

Funeral arrangements for Holt are being handled privately by the David J. Henney Funeral Home. An obituary for Holt requests that, in lieu of flowers, contributions may be made to Bethany Lutheran Church, 3104 W. Liberty Ave., South Hills.