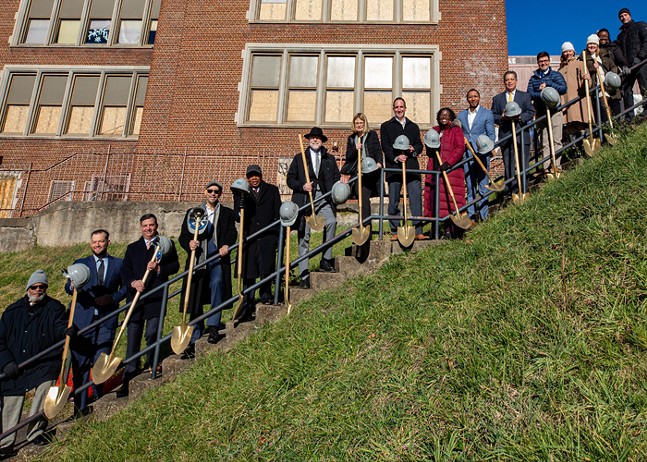 Construction began Monday on a $24 million effort to develop the former Gladstone School at 327 Hazelwood Ave. into “The Gladstone Residences,” a 51-apartment complex.

Nonprofit co-developers The Community Builders and the Hazelwood Initiative intend to designate the majority of the living spaces, 43 apartments, to affordable housing. The developers say the need for affordable housing increased in the years since the Hazelwood Green project began attracting large commercial investments and pushing up neighborhood rent and housing prices.

“We’re thrilled to offer life-long residents of Hazelwood the opportunity to live and thrive in their community, regardless of income,” said Juan Powell, TCB Mid-Atlantic regional vice president of development. “We look forward to expanding housing options in Pittsburgh by providing more first-class affordable and mixed-income housing in the future.”

Gladstone Residences will include four studio apartments, 39 one-bedroom, and eight two-bedroom apartments. Of those spaces, 43 units will be made available to people who are at or below 60% of the area median income. Twenty of the apartments will include housing vouchers from the Pittsburgh Housing Authority and six units will be fully ADA accessible.

Other features of the project include the building’s historic auditorium being transformed into a community meeting space, an on-site management suite, a top-floor lounge with a skyline view, a flexible space for events, a wellness room, and an outdoor patio. Gladstone Residences will also be an all-electric development.

Construction is projected to be complete by the end of 2023.

“Gladstone School was a neighborhood institution that connected multiple generations in Hazelwood until it closed in 2001,” said Sonya Tilghman, executive director of Hazelwood Initiative.

“Now it can be a source of neighborhood pride again and stand as a major step forward in maintaining affordability in this community.”