Have you seen this bird? Mysterious red pigeon appears in Downtown Pittsburgh 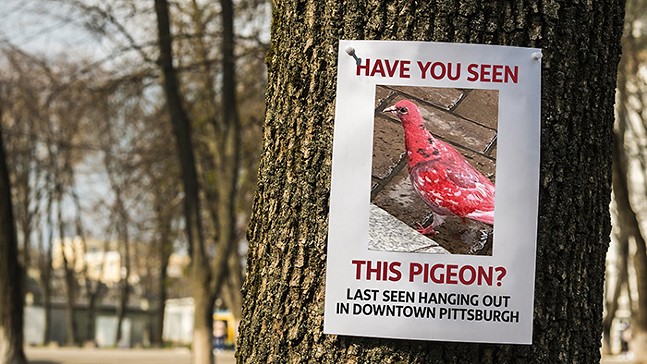 Reports of a bright red pigeon hanging out in Downtown Pittsburgh have been circulating for several weeks, with a video first shared to Pittsburgh City Paper's Twitter account on Fri., June 24:

@WTAE @KDKA @WPXI @PGHCityPaper can someone explain this #redpigeon hanging around Point Park U?? He seems okay but is this normal?? pic.twitter.com/ikjetPsdHK


Since the bird wasn't talking, City Paper reached out to one of the best local bird-brained sources we could think of, the North Side's National Aviary, home to more than 500 birds from around the world.

"The red pigeon from the video appears to be a homing pigeon that has been dyed red/pink," the Aviary's marketing manager Carly Morgan emailed City Paper after talking it over with her team. "Some people will use a non-toxic dye to make their pigeons more colorful and noticeable. It is very unlikely the pigeon is lost. In fact, homing pigeons are excellent navigators, so the bird should find its way home soon."

Two days later, the bird was still wandering Downtown, as seen from this video posted by Twitter user Steve Smith:


Last week, the bird reappeared on a thread on Pittsburgh Reddit with even more sightings including, "I saw this bird chilling on top of Primanti Brothers in market square about a week ago. People were gathering around taking pics." And, "I saw this last week and just thought I was losing my mind. Thanks for confirming I'm not."

Then, on Tuesday afternoon, City Paper was sent this photo from reader Annie Bontempo saying she spotted the bird two days ago outside the CVS on Smithfield Street. "It was just looking around for some food and hanging with other normal looking pigeons," she tells CP.

Photo: Annie Bontempo
The Audobon Society of Western Pennsylvania, a local organization that focuses on educating patrons on birds and nature, wasn't familiar with this particular red pigeon when contacted, but communications director Rachel Handel says that "typically, once a homing pigeon gets lost, it will stay in that 'new' location, just like any other pigeon would."

"That's likely why it is now interacting with the other pigeons and perhaps joining an established flock," she continues. "Most people that race or fly pigeons wouldn't want the pigeons that don't return on their own because the owner would need to keep going out to locate the bird and bring it home."

Damien Martinez Coro, a member of the Tarentum Homing Club, a racing pigeon club located north of Pittsburgh, says that their organization does not dye pigeons, and after looking at the photograph that we shared with him, he said he believes it's possible that the red coloring is natural.

However, Karen Clifton, executive director of the American Racing Pigeon Union, says there's no way to determine if the pigeon was dyed over email. "There are many different colors that pigeons might be," she says. "There are those individuals that have a keen interest in genetics, and they breed for special colors."


The American Racing Pigeon Union has approximately 10,000 members nationwide, including birds that belong to clubs and participate in races, but they also have members who "simply enjoy the birds in their backyard and appreciate the history of the birds' service to our country," Clifton says.

"Homing pigeons have a natural homing instinct and very seldom do they not return," she adds. "Pigeon fanciers take great care of their birds with special diets and supplements, vaccine, etc. So the pigeons want to come home."

So is Pittsburgh's newest red Downtown pigeon resident a lost homing pigeon or just a beautiful, naturally bright red specimen? There's no definite conclusion yet, but if you have more info on this bird, please reach out. After all, a bird in the hand is worth two in the bush.

It is possible there is a third option to this mystery: animal cruelty.

This morning, City Paper was emailed the following screencap from a private personal Facebook page. The name has been redacted.

CP reached out to the Pittsburgher who posted this status who replied, "Don't know any details, sorry. I just heard it was spray painted."  We have been told he has since deleted his post.

However, we did contact several animal organizations asking what this means if true.

Cheryl Mosco, a local pigeon advocate and moderator for Facebook group LOST & FOUND HOMING & FERAL PIGEONS  PIGEONS FOR ADOPTION PITTSBURGH, suspects animal cruelty, noting that the bird in the photographs is not banded and looks feral.

"It's illegal to trap for these weird purposes, and yes it is harmful," Mosco says. "No one is sure what was used to spray and from what I saw, the pink was in the bird's eyes as well, as well as making the bird stand out to predators."

In 2015, the City of Pittsburgh passed an ordinance, signed by Mayor Bill Peduto and sponsored by city councilor Darlene Harris, adding a new section to city code, "prohibiting the capture and harm of any wild birds."

Natalie Ahwesh from Humane Action Pittsburgh, "a coalition of citizen lobbyists dedicated to advancing animal protection through legislation and policy," says that if the bird was indeed spray painted, it's illegal, harmful, and she advises the public contact the city's Animal Control office if they spot it again.

CP talked to a representative at Animal Control who confirmed that people can contact their office and let them know the location of the bird if they see it, but noted that it is often difficult for them to capture an animal that's able to fly away.