Hate By Any Other Name

Too often, we diagnose a problem as an issue of "Hate" and leave it at that 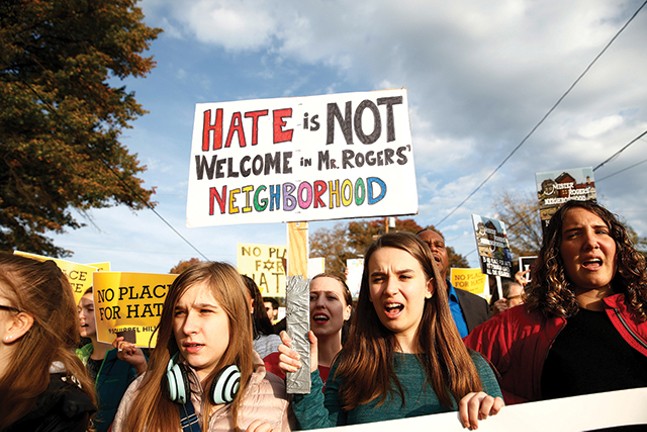 CP photo: Jared Wickerham
Multiple groups of marchers made their way to the Tree of Life synagogue last week during President Trump’s visit, three days after the mass shooting in Squirrel Hill.

Imagine receiving a doctor’s diagnosis and simply being told, “You are sick.” Your next logical question would be, "sick with what? How did I get it? And what is the remedy?" And yet in too many instances, like the mass shooting at the Tree of Life synagogue last week, we don't ask the next question. We take the initial diagnosis of "Hate," and leave it at that. “Hate” allows us, reasonable people, to deflect responsibility and culpability in a system. A system not simply built on some vague sense of "Hate," but the specific Hate of white supremacy.

As we witness a rise of extremist white supremacist patriarchal terrorism, we must understand that we live in a system that supports those ideas. White supremacy is the creation of “racial” designations and hierarchies, based on skin color and/or national origin, in our one human race. "Whiteness” is not inherent. "Whiteness" was invented as an attempt to justify the transatlantic trade of enslaved Africans, by distinguishing “full” human beings from others. Later, it became the 1787 constitutional compromise known as the Three-Fifths Compromise, in which people of African descent were deemed 3/5 human.

The flexibility and malleability of “whiteness” is shown again in American history as Irish and Italians immigrants, after facing their own discrimination, were eventually given white status. Additionally, Syrians and some Latinx people are considered white according to the U.S. Census. People from North Africa and the Middle East consistently debate the “white” designation. And a recent Harvard University affirmative action case seeks to place Asians as the main aggrieved party vs. Latinx and African-Americans.

Most of us are not white supremacist extremists, but how do we perpetuate white supremacist ideology and practices? We look for connections to this system — whiteness and/or maleness as a way to connect to power.

The white supremacist patriarchy says to a little girl that a boy pulls her hair because he likes her. A teacher can impose harsher punishments on African-American children than white students for the same infraction. White supremacist patriarchy tells a woman that she is being pushy and bossy, while rewarding a man, he is being decisive and strong. It is the reason that, as reported by the Economic Policy Institute, “Women can’t educate their way out of the gender wage gap.”

This system allows a local TV station to broadcast a mug-shot like headshot of a Black murder victim, but a sunny family photo of the white alleged perpetrator. It means a white person rarely fears for his life when getting pulled over by the police. It kills an unarmed Black child but allows an armed white male perpetrator to be captured alive.

The question is not what is the opposite of white male supremacist patriarchy - that linear, binary thinking is in itself patriarchal. The answer lies in a balanced, sustainable system not based on color, gender, or sexual identity, faith, or physical ability.

The word hate relieves us of responsibility because we don’t see ourselves in that word. But when we call this system by its real name, we can look at ourselves and how we contribute to an unjust system. Then we can work together for real equity and justice.