Has Pittsburgh’s focus on ‘whiz-bang tech startups’ left manufacturing companies out of the big picture?

“The options get very narrow.” 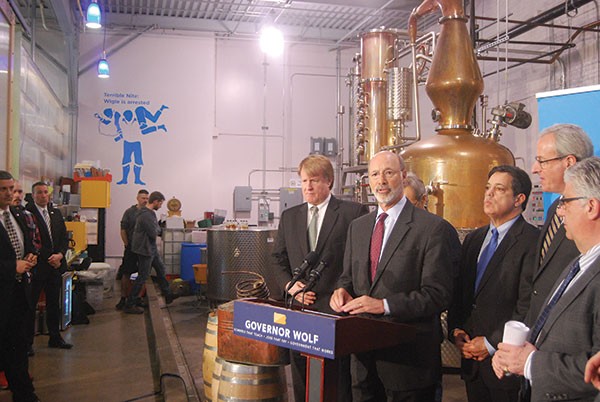 Wigle Whiskey was buzzing on a Thursday morning in March, and not with the normal happy-hour crowd of patrons looking to sample some award-winning craft liquor. The Strip District distillery was filled with eight Democratic politicians and their respective entourages. Pittsburgh Mayor Bill Peduto, Allegheny County Chief Executive Rich Fitzgerald, state senators Jay Costa and Wayne Fontana and others were all singing the praises of Wigle for raising its minimum wage to $10.10 an hour. Gov. Tom Wolf even showed up to hold a press conference.

“This is a really big deal. … We are trying to send a message that in Pennsylvania, we need to do this,” said Wolf at the press conference, referencing the push to raise the state minimum wage. “It makes good business sense. All Pennsylvanians need this, and examples like Wigle show [this is important].”

Pittsburgh City Councilor Corey O’Connor said Wigle was the first company to take advantage of his minimum-wage initiative, which provides free advertising at bus shelters for companies that increase their minimum wage to $10.10 an hour. “The city wins, the business wins, and most importantly, the workers win,” said O’Connor.

But while politicians are eager to politicize the good labor initiatives of small businesses like Wigle, when it comes to helping them and others expand or move into the city, some are feeling left behind.

Wigle has felt this pressure, too. The distillery is expanding to a larger facility in North Side’s Spring Garden neighborhood. And co-owner Meredith Grelli says that while Wigle has gotten some support from city officials, it was a struggle to find a site to expand.

Grelli says Wigle tried many tactics to locate a larger site, including reaching out to community-development corporations, contacting city officials, searching online and meeting with brokers.

“We went to a broker once and told them what we were looking for,” says Grelli. “And they said, ‘Good luck, let us know if you find it.’”

After more than a year of searching, Grelli says Wigle finally found a place up the street from its barrel house on Spring Garden Avenue, at the site of an old tannery.

Wigle’s difficulty in finding a large facility is not unique. Hitchhiker Brewing needed a year to find a suitable building in the South Side, and founder Gary Olden expressed relief when his plan was OK’d by the Urban Redevelopment Authority of Pittsburgh in January. Hollymead’s Bute says he has been looking for a space for a food-manufacturing incubator for about a year but has not come close to finding what he is looking for.

He wrote in an email to City Paper that there is a weak commitment to manufacturing, especially food manufacturing, in the city. He cites the housing boom and loss of manufacturing spaces in Lawrenceville as a prime example.

“The city does not seem to have a proactive policy of any sort to protect areas of the city for light manufacturing,” wrote Bute. “This will push more of that use out of the city.”

In fact, two large food manufacturers looking to expand recently moved outside Pittsburgh city limits. Paragon Foods moved from Lawrenceville to a new $15 million, 88,000-square-foot facility in Warrendale that could accommodate up to 190 jobs. Alber & Leff Foods, makers of B&L Sour Cream, is moving from Chateau in the North Side to Bridgeville, in the South Hills. According to the Pittsburgh Business Times, the food distributor had been searching for a new site for more than five years.

Alber & Leff’s owner told the Business Times that “it’s tough to leave the city, but we had nowhere to build there.” The company had been located in Chateau for more than 30 years.

Bute has toured old manufacturing sites in the North Side (including Alber & Leff’s old site), but says that many of them need extensive work to become functional again. He says many city buildings that were once home to manufacturing are being converted to other uses.

Rick Schweikert, a real-estate broker at Keller Williams, says the market is “very tight” for commercial real estate and that a lot of manufacturing buildings are being converted to residential spaces and offices.

Schweikert says this competition is only exaggerated because “manufacturers want to be in places where their workers and management want to live.”

This comes at a time when the region is experiencing a boom in manufacturing investments. Last year, 63 manufacturing expansions were announced, more than in any other sector of the economy. However, it appears that many of them were outside of city limits. According to 2014 stats (the most recent CP could find) from the business coalition Pittsburgh  Regional Alliance, out of 40 manufacturing-related expansions that year, only six were located in Pittsburgh, and one of those was by soon-to-be-relocated Paragon Foods.

Despite the obstacles and trends, Bute is optimistic that his food-incubator will take off soon, considering the growing desire for locally sourced food and attention to social-justice issues. Bute says light manufacturing can provide good jobs and address income inequality. However, he feels the city’s economic priorities are misguided.

“We will hopefully have good news on this front soon ... [but] Pittsburgh is way in the dark ages and full of itself with whiz-bang tech startups that don’t add jobs or create long-term value,” says Bute. “Clearly there is little effort to define the local food system as an economic unit like we do technology.”