A restaurant that pulls off being both upscale and casual, with a fresh and original seasonal menu 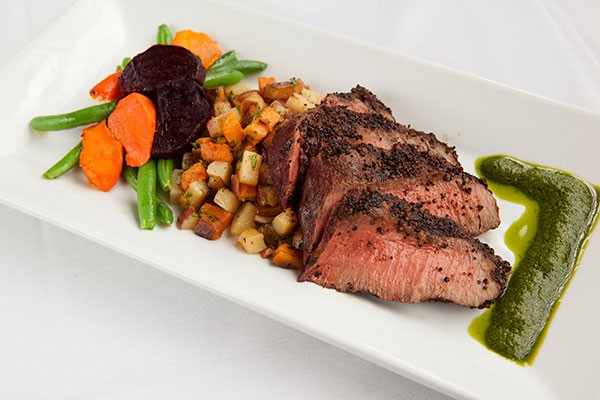 Decor is a slippery variable in the equation of memorable dining. Many restaurants have been designed with great care to ensure that the surroundings complement the meal; in others, a lack of decor seems to secure the experience almost to the same extent — who doesn't have a favorite "hole in the wall" they've returned to repeatedly?

And then, occasionally, a great space comes first, seeming to beg for the right restaurant for people to visit. In this category is Hartwood Restaurant in Glenshaw. Built to house the headquarters of the Harmar Coal Company, the building's Victorian charm attracted a bookstore and café in the late 1980s, along with a lovingly curated collection of architectural salvage: mantels, stained-glass windows, even wrought-iron fences, all brought indoors to furnish a series of rooms that now serve as the restaurant's dining rooms, each with its own unique character. Ours had real tree trunks rising from the flagstone floor to the vaulted ceiling, giving us the feeling of dining al fresco (which is possible, too, on Hartwood's outdoor patio, in warmer weather). The shelves from the building's bookstore days remain, complete with an eclectic library, and it's fun to peruse the titles while waiting for menus, food and drinks.

To this idiosyncratic setting, chef Jonathan Holzer has brought something far more ambitious than a cafe, creating seasonal menus that are fresh and original. Hartwood is one of a few restaurants that can pull off being both upscale and casual at the same time, offering fare as elemental as shepherd's pie (called "cottage pie" and made with shaved ribeye and Guinness) or as refined as scallops soubise.

The menu was lengthy, but the starters were few enough that we quickly chose two: pork dumplings and scallop tacos. The former were as stripped down as the latter were dressed up. Good, meaty, traditional Chinese-style pot stickers were served steamed with a black-pepper soy sauce, which could have used a little ginger or ponzu for brightening. We set them aside to focus on the tacos, which came in tiny, crisp shells filled with chopped sea scallops, eggplant "caviar" — a savory puree — and bright lemon crema. The tacos were accented with bits of chorizo cooked to the crispy texture of bacon, but with more intense flavor, and a bit of spicy piri piri sauce on the side really made these tasty morsels sing.

If the tacos left any doubt as to Hartwood's expertise with scallops, scallops soubise put it firmly to rest. Named after its sauce, which is essentially an onion-infused bechamel, this dish featured some of the best, most succulent, tenderly seared scallops we have ever tasted, enhanced by a complex sauce infused with smoked onions and nutty Parmesan. A sweet-pea risotto was perfectly done, creamy with firm grains and bright green peas creating highlights.

Sweet peas also made an appearance as filling, along with ricotta, in housemade ravioli. These were served in a simple brown-butter sauce with shaved Parmesan, sunflower seeds and balsamic-glazed carrots that stole the show with their almost citrusy astringency. A sea-salt-roasted beet and asparagus salad over peppery arugula, dressed with a white-truffle vinaigrette and scattered with earthy roasted pepitas and tangy gorgonzola cheese, tasted like a plate of pure spring.

We had quibbles with two basically successful dishes: fennel-crusted salmon, while crisp and flavorful without and beautifully translucent within, was unbalanced by too much salt, while a tender glazed pork chop was simply too rare. We were intrigued by the promise of a ginger-beer barbecue glaze on the chop, but sweet flavors dominated the rest. What rescued the dish were slivers of candied ginger, which offered ample zing to each bite. The bed of buttermilk mashed potatoes was superb, creamy and flavorful enough to hold up against the sauce. Unfortunately, roasted Brussels sprouts could have used a bit more time under the broiler; they were too lightly browned for really intense flavor.

One of Hartwood's rooms serves as Whispers Pub, an attractive tavern, and we tried a burger from its menu. Though served on a good Kaiser roll and made with beautiful Angus beef, it was seasoned too lightly; a sprinkle of salt helped a lot. Like the entrée list, the sandwich menu covered quite a bit of ground, from grilled salmon with pesto to a comforting classic tuna melt and that local institution, turkey Devonshire.

At Hartwood Restaurant and Whispers Pub, both the food and the ambience are memorable.