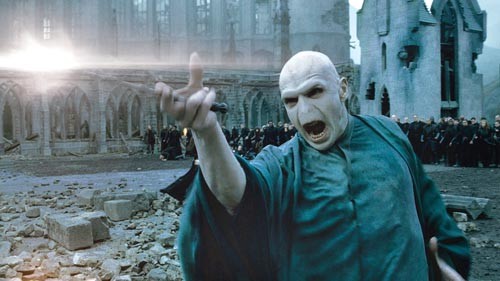 That's it, folks: 14 years, more than 4,000 pages and nearly 20 hours of movie all boil down to this critical meeting when the boy wizard goes wand to wand with his sneering nemesis, Lord Voldemort.

Part 2, directed by David Yates, is the end of our journey: J.K. Rowling's novels have been read (and re-read), and when the lights come up on Part 2, we also bid goodbye to a satisfying and entertaining film series.

Normally, I'm first in line to decry the movie version of a beloved book, especially a work that has entranced kids into using their own minds to conjure fantastical worlds and scenarios. But I tip my hat to the Harry Potter series: These were faithful adaptations (rare in Hollywood) that despite necessary truncation managed to deliver the novels' complicated wizarding world and increasingly dark tone.

In some respects, the series got lucky, especially in the casting of the three lead actors who grew naturally into their fictional roles. The producers built a massive supporting cast, tapping what seemed like every British thespian, who dutifully reported back for each film. (Only Richard Harris, the original Dumbledore, was called away by Fate.) And the CGI that gave life to the unseeable (Quidditch, magical creatures, Gringotts bank) rarely felt cheesy or intrusive.

But for my money, the film series' greatest gift has been the indelible characterizations of the work's two primary villains: Lord Voldemort and Dark Arts instructor Severus Snape. Nothing Ms. Rowling ever wrote could match the enthralling malevolence Fiennes brings to the megalomaniacal, snake-like Voldemort, from his overly sssssssssibilant tones masking unspeakable savagery to his uncoiled fury.

And what of the morose, unpleasant Snape, whom Alan Rickman has imbued with such ill-concealed demons? He's the teacher who openly despised Harry and, who, in The Half-Blood Prince, committed an unforgiveable act. In Part 2, Snape's true nature is finally revealed. It is, on paper, a ridiculous bit of melodrama that on screen Rickman, in keeping with Snape's stunted personal skills, quietly wrings for its considerable pathos.

The series' conclusion is rightly about the long triumph of good over evil, and how one shy boy manned up to lead the fight. But what would the battle be without such grand villains? A job well done by all.