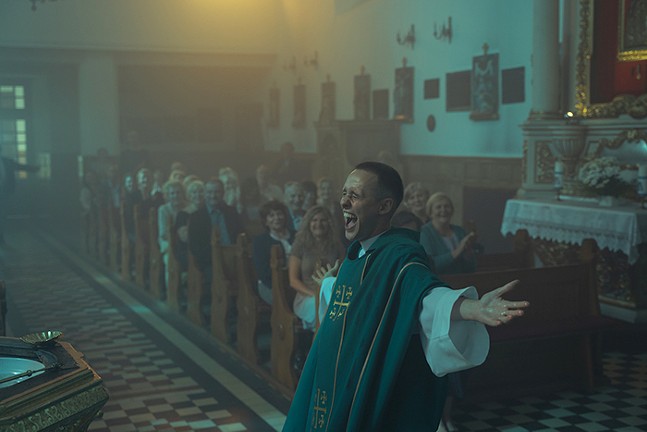 Photo: Courtesy of Film Movement
Corpus Christi (Boże Ciało)
The Harris Theater and various departments at the University of Pittsburgh are working together to present a festival showcasing films from all over Europe.

The historic Downtown theater will host the Pittsburgh EU Film Festival in partnership with the European Studies Center and Film Studies Program at Pitt. Taking place from Jan. 29-Feb. 3, the event offers films from Italy, France, the Czech Republic, and other countries.

The festival, which is also presented by the Pittsburgh Cultural Trust, will include a combination of both in-person and virtual screenings.

Prof. Randall Halle, who serves as director of both Pitt’s Film and Media Studies Program and Critical European Culture Studies Program, says that festival organizers tried to cover "all of Europe, South and East, North and West.”

“We consulted closely with our various languages and cultures programs, French, German, Hungarian, Italian, Polish, Spanish, and Slovak,” adds Halle. “Pitt is the home to a unique Slovak Studies program. And we thought about the broader Pittsburgh community.”

Halle says he attends a number of film festivals, including the Berlin International Film Festival, every year, and often thinks “that would be a great film to show back home.”

“My own research focuses on the way that European film seeks to build a European audience that cuts across the national borders while showing something of the local interests and culture,” says Halle. “The films we selected represent the dynamic of a good national film is a good European film. They tell local stories that should interest a broad audience.”

The festival opens with Diamantino, a fantastical, genre-bending tale about a Portuguese soccer star who, according to a synopsis from Kino Lorber, “gets swept up in a gonzo comic odyssey involving cigarette-smoking evil twins, Secret Service skullduggery, mad science genetic modification, and a right-wing anti-EU conspiracy.”

Audiences will also get to experience Corpus Christi (Boże Ciało), the story of a young criminal who poses as a priest in a small Polish town. The film earned a 2020 Academy Award nomination in the Best International Feature category.

Allyson Delnore, interim director of Pitt’s European Studies Center, says the goal was to "highlight European diversity by including films from many different countries, but also to highlight European co-productions,” referring to how many of the selected films spanned nations.

She adds that management at the Harris also had suggestions for “new films that were generating buzz that would be great to bring to Pittsburgh.”

Delnore says she sees the festival as helping to advance the mission of Pitt’s European Studies Center, which “exists to promote teaching, research, and learning about Europe.”

“I think that film is an accessible medium that provides an easy entry for people who might not have been to Europe before (and who certainly haven’t been able to go in a while because of the pandemic),” she says. “But because filmmakers are artists and storytellers, films are also fantastic vehicles for people who already have a lot of experience with Europe to continue to engage with and deepen their understanding of European cultures and languages.”

Halle believes that the festival could serve as a welcome escape in the continuing pandemic.

“It is a challenging time and these are films that remind us of a big wonderful world out there,” says Halle. “I hope that after the festival is over, the people who attended ask us: ‘What time next year?’”
Pittsburgh EU Film Festival. Showtimes vary. Fri., Jan. 28-Thu., Feb. 3. Harris Theater. 809 Liberty Ave., Downtown. $11. trustarts.org