This cozy inn offers incomparable atmosphere but the menu of American, German and Mexican fare is uneven 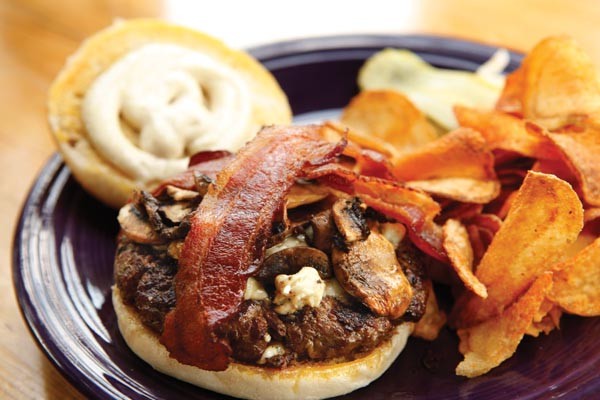 Near the turn of the 19th century, German Johann Georg Rapp followed a calling from God to southwestern Pennsylvania, where he founded the religious commune of Harmony, then later a new town near Ambridge called Economy. Rapp favored Pietism, and held a firm belief in the imminent return of Christ, for which the Harmonists purified themselves through various abstentions.

We suspect that Pietists would have something fairly stern to say about our gluttonous ways, but we do travel far and wide in search of good food in interesting settings — which is how, 200 years after Rapp, we found ourselves on the quaint streets of Harmony. Our destination was the Harmony Inn, originally an impressive home and later converted to the Ziegler Hotel. Its present owners took it over nearly 30 years ago, lovingly restored it, and added a charming beer garden and some ghost stories to accompany a menu that, improbably, straddles American, German and Colorado-style Mexican.

Befitting the Inn's reputation for historic charm, the rooms are as cozy as the woodwork is impressive. But rustic tabletops in place of white tablecloths eased any concerns that history must be stuffy, and the food was comforting, if perhaps a touch dated. Uninspired by the starters list — which read like a bar menu with wings, nachos and spinach-artichoke dip — we skipped directly to entrees.

Here, choices were more interesting, and we saw an opportunity to sample three tempting items — chipotle grilled shrimp, smoked brisket and a grilled chicken breast — by ordering the Harmony Trio. We initially thought the chicken breast a bit of an oddity — it's pretty rare for a chicken breast, even marinated, to have a lot of presence. But the Inn's was quite impressive: tender and juicy, lightly charred but with the fruity flavor of the marinade coming through. The shrimp were awfully small, but tastily infused with the smoky heat of chipotles. Best of all was the brisket — smoky, fatty and unencumbered by mediocre barbecue sauce. There's no doubt that this is what Jason would order on a return visit.

He certainly would not repeat the daily special of garlic-infused prime rib, though. The cut was a disaster: thin, tough and overdone. The shame of it was that a few bites delivered what the description had promised: pungent yet sweet garlic in a mild yet beefy slice.

With its Victorian and Germanic pedigree, the Harmony Inn didn't seem like a promising venue for Mexican food. Still, we were impressed and intrigued by the fact that the owners, native Coloradans, have been serving "Colorado Mexican" there since 1985. Surely this makes the Inn one of the earliest independent restaurants to serve Mexican food of any kind in Butler County.

Unfortunately, the Boulder Burrito was about what one might have expected in 1985: ground beef wrapped in a tortilla with refried beans and rice, topped with a jumble of salad ingredients, sour cream, cheese and a mild red chili sauce. An application of the very good chipotle/blue-cheese dressing from Jason's salad revived its flavor somewhat. But the bar for Mexican cuisine has risen much higher in our region in recent years, and we were surprised that the trend wasn't reflected in this recipe.

A bacon-topped burger, meanwhile, was par for the course: crisply charred but not burned, full of beef flavor though not especially juicy.

Perhaps we should have stuck with the German items on the menu. Although we didn't order the Jägerschnitzel, a number of German sides we received demonstrated that the Inn's German offerings are grounded in a real understanding of this cuisine. Red cabbage had a flavor balanced between sweetness and tart vinegar; tender-firm potatoes in potato salad absorbed the sourness of the dressing; and spätzle, little hand-formed dumplings, had an ideal texture, chewy without any gumminess.

Harmony Inn offers incomparable atmosphere. On the whole, the food we had did not merit our devotion, but showed hints that there might be some menu items that could.