Harking to 1972’s Mod Trolley, the Port Authority and the Carnegie roll out retro buses and a new exhibit

“It was like looking at a record album going down the street.”

In 1972, “Mod Desire,” also known as the Jolly Trolley, took the city by storm as it rolled down the streets of Pittsburgh — a piece of public transportation disguised as public art that delighted young and old alike with its psychedelic design.

In an era when many buses and trolleys sported utilitarian color schemes, Mod Desire boasted a sunburst design in yellow, orange and magenta. The trolley was the work of Pittsburgh-based Peter Muller-Munk Associates, the namesake firm of Peter Muller-Munk, the legendary German-born designer who revolutionized industrial design in the United States.

Today, former PMMA director George Scheuring says that he called the new vehicles “Life Savers on Liberty Avenue,” after the candy. The trolley was designed by PMMA in partnership with Port Authority Transit (as it was then known) for PAT’s Early Action Program, in which new trolleys would replace worn and torn ones dating to the 1930s. Because it would take a few years to release a whole new fleet, PAT needed something to remind riders of the coming changes. 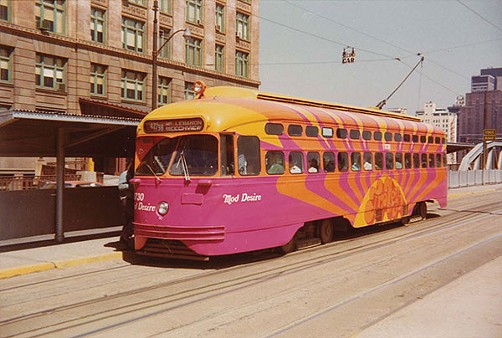 Photo courtesy of The Port Authority of Allegheny County
1967’s Mod Trolley in action
“They were looking for something that would symbolize the program and its philosophy,” says Scheuring, “something on the street that was a mobile billboard.” The team designed a series of trolleys with solid colors and wrap-around white bands.

They called in PMMA’s graphic designer, Diana Riddle. Born in England, she moved to the U.S. to study design and at PMMA became well known for her contemporary designs.

Inspired by the dynamic work of public-transportation designers in Europe, Riddle says today that she was glad the Port Authority allowed PMMA to do such “exciting” things with the new trolleys.

However, she recalls, “the Mod Trolley was not a cheap bus to paint.” Nor was it easy to design. “It’s an intellectual process. … You sketch. Then finish. You might change color several times, refining it as you go along,” she says.

The hard work paid off. The Early Action committee was thrilled by the new designs. Scheuring recalls the presentation to PAT’s board. “[Board chairman] Bill Henry stood up, slammed his hand on the table and said, ‘We’ll buy [the design], but we’ve got to have that Mod Trolley!’ If you want to have a splash, this is the splash you’re looking for. It was just sensational,” he says.

Catherine Walworth, a curatorial assistant at the Carnegie Museum of Art acquainted with the trolley’s history, says, “It was like the sun came out in Pittsburgh. … It was like looking at a record album going down the street. It was hip and cool.”

The Mod Trolley attracted attention across the U.S. Today, it appears on postcards and in replicas. And this month, Port Authority and the Carnegie are seeking to recapture a little of that 1960s excitement, as three new replica Mod Trolleys roll out on Nov. 18 and, three days later, the retrospective Silver to Steel: The Modern Designs of Peter Muller-Munk opens at the museum.

“You can’t plan these kind of connections,” says Carnegie Museum curator Rachel Delphia. She credits Port Authority creative director Tim Frank, who is inspired by the work of Andy Warhol and is responsible for the quirky designs of the buses we see on the streets today, like the ones wrapped to display bouncy rhymes along the length of the vehicle.

Frank, for his part, credits the PMMA designers who worked with PAT in the ’60s for “waking everyone up to the fact that transportation could be cool.”

When the Carnegie contacted him about the Muller-Munk exhibit, Frank says, “I was pretty into it by the end of the phone call. It is not often all the pieces fall into place to be able to tell a story like this one.”

In addition to the exhibit, PAT created a video documentary about the trolley, which includes an interview with Riddle.

“PMMA’s design for the Mod Trolley shook things up with a breath of fresh air,” says Delphia. “Then, as now, a whimsical trolley or bus can brighten someone’s day.”

She adds: “Hopefully, the Mod Trolley’s reappearance is ... an eye-popping and intriguing invitation to take the bus to Oakland [to] see what else PMMA designed for Pittsburgh and beyond!”

[Editor's note: This story has been amended to correct factual errors in the original version.]