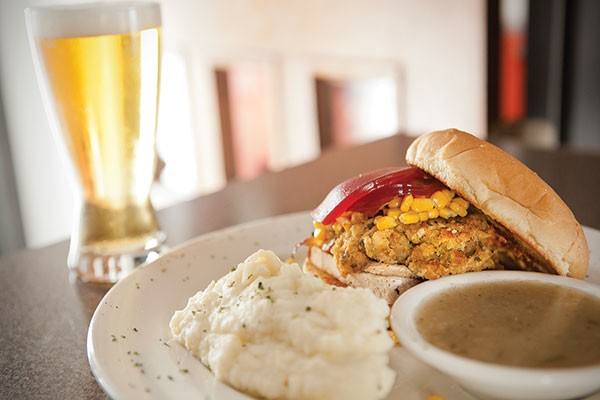 So Jason recently had a minor bike accident, which, interestingly, has prompted neighbors to ask: "Motorcycle or a bicycle?" (It was the latter). Yet when he went into the countryside for some work meetings, the question wasn't even posed; people simply started sharing their Harley stories.

Which made it an appropriate week to visit Handle Bar & Grille, a biker bar of the motor variety in Canonsburg. Its menu promising from-scratch cooking was intriguing enough to lure us outside of our usual orbit.

To partake of it, however, we first had to break one of our fundamental rules while eating and drinking out: to eschew establishments without windows. Handle Bar's dining room doesn't have windows, either, but at least its entrance, off the rear parking lot, issued a welcome via a sandwich board displaying daily specials.

Inside, it was bright and cheerfully decorated with a Route 66 theme. Gas-pump nozzles served cleverly as restroom door handles, and a ride-on motorcycle video game drew our kids like the proverbial moths to a flame.

While the menu was mostly typical bar-restaurant fare — burgers, sandwiches, wings — the kitchen's creativity showed in a few unusual, if not unique, items, like chorizo-filled wontons and the Black Friday, a sandwich comprised of typical Thanksgiving ingredients. There were entrees as well, mostly Italian-American standards like fettucini Alfredo, spaghetti marinara and chicken piccatta. A few items, though still listed on the menu, have been pared off; we were a bit surprised to see meatloaf go, as it seemed like a reliable staple, not to mention squarely in the historic Route 66 diet plan.

Our first taste of the kitchen's handiwork was the aforementioned wontons, crisp little umami bombs of spicy chorizo sausage mixed with sweet roasted red pepper and rich, subtly tangy cream cheese. They were served with a spicy ranch dipping sauce, and would be superior replacements for the jalapeño poppers more often found at taverns.

The menu also included a modest South of the Border section, from which we ordered the chicken quesadilla. The tortilla was stuffed thick with shredded chicken, as well as pepper rings and diced tomato, into whose crevices the cheese melted nicely. The quesadilla was supplemented by an adequate pico de gallo and sour cream. Best of all, the tortilla was crisp, not brittle, from frying — a refinement of technique too often overlooked.

Handle Bar deep-fried its stuffed banana peppers, and it wasn't a bad idea. The coating added a welcome, crunchy layer to the spicy sausage and gooey cheese within. But between this crust and the pepper there appeared to be another, doughy layer, presumably to hold the whole thing together during frying. Its thick but flavorless chewiness diluted the stuffed pepper's other, more savory tastes and textures.

Garlic-parmesan wings were suitably coated in lots of chopped garlic and finely shredded cheese, and the skin was crisp beneath. But the meat itself was surprisingly under-seasoned, a flaw it's not really possible to correct at the table. H-Bar pasta, with grilled chicken and portobello mushrooms in a red pepper-cream sauce, also failed to realize its full seasoning potential. A sprinkling from the salt and pepper shakers improved matters some, but would have been better cooked into the sauce.

The Dyna Burger was a five-ounce patty of Angus beef which, though it met our expectations of a bar burger, distinguished itself mostly by its pretzel bun and accompanying "springer" fries. These were excellent house-cut curly fries which were lightly sprinkled with seasoned salt and had a good crisp-to-fluff ratio.

Catfish sliders were served in basic American sandwich buns, a choice which suited them. The catfish pieces, though a bit skimpy, were scarlet and black from Cajun seasoning, but their pleasantly muddy flavor came through, and the lightly creamy coleslaw provided crunch and cool counterpoint to the spiced fish.

The Black Friday impressed us by being made with real, carved turkey, but otherwise could have used more of the cranberry sauce to enliven the combo of bread stuffing and, well, bread. The side dish of mashed potatoes was served with a well-prepared Thanksgiving-dinner grade gravy.

After all, bikers appreciate good food, too. They might even appreciate a little more seasoning here and there. For our part, we appreciated Handle Bar's solid effort to prepare pub grub with creativity and care in Canonsburg.