Hand to God at City Theatre 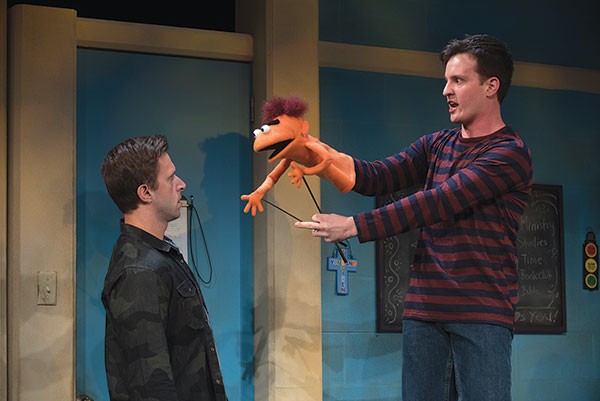 Sublimation might not be healthy, but it sure is entertaining. At least that’s the message behind Robert Askins’ Hand to God, making its Pittsburgh premiere at City Theatre.

Jason is a teenager with problems. He lives in a small, evangelically Christian Texas town, his father has recently died and his mother, Margery, is barely hanging on. The pastor, to help distract her from her grief, asks Margery to stage a student puppet show. It starts out well but soon the puppet Jason creates, Tyrone, becomes the vehicle he uses to express his pain and rage, and everyone becomes a target of Tyrone’s extremely foul-mouthed and blasphemous rants and physical attacks.

Askins’ 2015 play is a swift and adrenaline-driven dark comedy which never slows its steady stream of trenchant gags. I think Askins might mean Hand to God to be more than just an extended skit about people making dirty jokes; he attempts to say something about our genetic need to create devils and saviors. But when all’s said and done, Hand to God really is just an extended skit in which the humor purposely goes “too far” … and you know what? That’s not a bad thing by any means.

Tracy Brigden directs with the same pedal-to-the-metal mentality as Askins’ writing. The story’s events could seem a bit silly, but Brigden’s momentum, and expert hand at comedy, never provides an opportunity to stop and think — she straps us in for the ride and sends us hurtling down the track.

Nick LaMedica plays Jason — who plays Tyrone — and does a terrific job differentiating between the two; when Jason and Tyrone have a conversation, we find ourselves looking back and forth as though there are two actors on stage.

Lisa Velten Smith pulls out all the stops for Margery. It’s a broadly written role with not much nuance, but Smith makes us care for the character. Tim McGeever plays the pastor with the right tone of smug solicitude, while Maggie Carr and Michael Greer, as peers of Jason’s, find comedy gold in sexual excess.

Seeing Hand to God could send you straight to Hell, but you’ll be laughing the whole way down.