This sports bar distinguishes itself with the depth and breadth of its offerings, but its strengths are countered by too many shortcomings 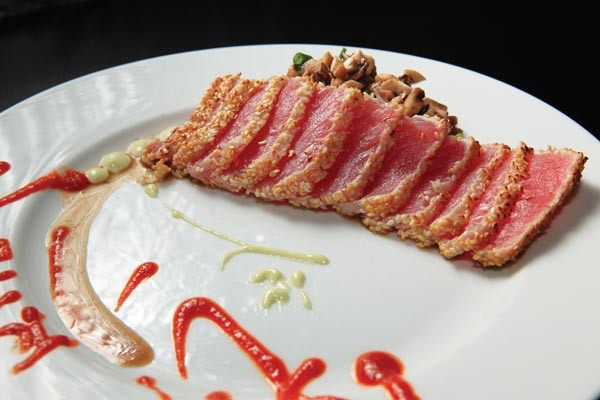 Hal's Bar and Grill is one of those Pittsburgh places that reminds you that, no matter how many stories Forbes runs about our booming economy, no matter how homogenized the exurbs get with chain-stocked "lifestyle centers," this will always be a funky place, if only for the topography. Located in a valley between the two Route 19s that wind through the North Hills, Hal's is in a plain-Jane cinder block building that actually lies across a bridge over a little creek. If not for a mention from a friend, it never would have struck us as more than another local sports bar.

Sports bars come in many stripes, from simple, TV-equipped venues for gathering to watch the game to black-and-gold incubators of warpath-worthy passion. And while there's some variety, one goes to a sports bar with certain expectations about food. The ubiquity of beer as the sports fan's beverage of choice tends to dictate items that make salutary accompaniments: meat, melted cheese and anything fried, for example. The fact that sports bars are casual places also contributes to the popularity of utensils-free, meal-in-one foods, such as sandwiches and pizza.

Some venues leave it at that. Others aim higher, hoping, no doubt, to tempt off-season diners and those who would otherwise be satisfied with the flat-screens at home. Hal's is the latter kind of place; in fact, to call it a sports bar may be to give it short shrift, despite the fact that the decor consists of predominantly black surfaces so as not to compete with the many, many screens mounted in a 360-degree array on the walls. Hal's has a substantial beer list, with many craft brews and Belgian selections for aesthetes of the genre; a kids' menu, suggesting that loud- and foul-mouthed fans are not the target clientele; and, alongside the sandwiches and the pizza, such ambitious entrees as osso bucco and sweet-pea risotto.

We began with one of Hal's more unusual appetizers, crispy seitan. Seitan, for the uninitiated, is wheat gluten or "wheat meat," a vegetarian protein with a hearty, meaty texture, hailed by Hal as a "vegetari-yinz staple." Its downside is that it has little, if any, taste on its own, and therefore any preparation must rely heavily on seasoning and/or sauces for flavor. Heed our advice at Hal's and choose your sauce carefully. We went with the chef's suggestion, sweet chili, and found that it was not assertive enough to keep us reaching back for more. Perhaps one of the other sauces — buffalo, Cajun, barbecue or Creole mustard — would have been a better match.

Another Hal's adaptation was buffalo chicken, available here as "meatballs." We were not sure what advantage was supposed to be gained over the more traditional wings; our preference still lies with their bone-in format.

Quesadillas have become de rigueur on most appetizer lists, but few non-Mexican kitchens attempt tortilla soup, so we tried that. The puréed tortillas gave the broth a thick, chowder-like texture, and while it contained adequate amounts of shredded white meat, its vegetable population consisted of a few lonely kernels of corn and diced jalapeño.

We were heartened by Hal's excellent pizza crust, which contributed not only crisp structure but warm, yeasty flavor. But "Margherita," which usually denotes a light cheese pizza topped with fresh tomatoes and herbs in lieu of a sauce, was a misnomer for our pie, which was slathered with a thick sauce reminiscent of slightly-diluted tomato paste. It was pretty good for a bar, if not quite up to strict pizzeria standards.

We were also dissatisfied with the pastrami sandwich. On the plus side, it featured meaty, thick-cut slices of pastrami (instead of paper-thin), judiciously (but not stingily) layered between grilled rye slices to construct a sandwich that was not a jaw-buster. But its flavor, even pumped up with mustard, pickles and sweet red onions, was bland. A side order of sweet-potato fries, however, was deliciously dark and salty-sweet.

Our server told us that the ribs and the osso bucco are the two best entrée choices; Jason chose the former upon assurance that the sauce wasn't too sweet. That was true, but it lacked any other noticeable character, as did the meat, which gave no hint of rub or smoke. True to the worst stereotypes of northern barbecue, the meat was mushy and bland, offering no challenge to the teeth nor the flavor to the palate.

Stacked up against other sports bars, Hal's distinguishes itself with both the depth and breadth of its offerings. But compared to many other casual restaurants, its strengths are countered by too many shortcomings.