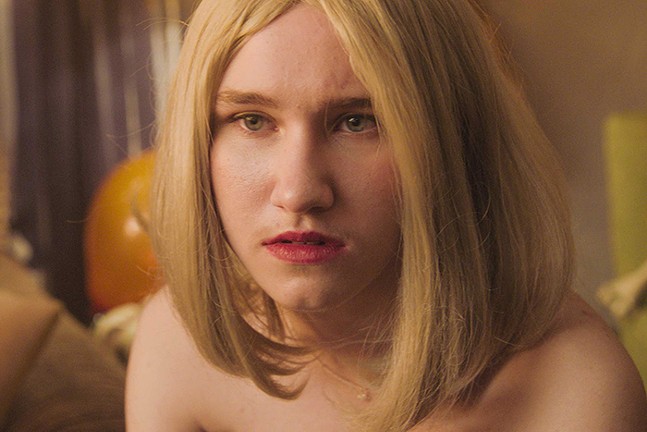 Photo: Courtesy of Hansen Bursic
Halloween 1987, part of the ReelQ Pittsburgh LGBT Film Festival
For his new film, Hansen Bursic wants to tell a different kind of coming-out story. Bursic’s short film, Halloween 1987, follows Cory, a teenager who dresses up as their girlfriend, Meg, for a high school Halloween party. As the night comes to an end, Cory is faced with a question: Who am I now that I have to take off the costume?

“There are so many films about coming out where the focus is on others,” Bursic tells Pittsburgh City Paper. “I wanted to divert from the classic coming-out narrative and really put the power back in when you come out to yourself, which, for a lot of queer and trans people, is a bigger feat.”

ReelQ will run from Thu., Oct. 6 to Sat., Oct. 15 and feature a lineup of 40 shorts and 19 feature films from around the world through both in-person and online screenings. Included are In From the Side, a gay rugby drama from the United Kingdom, and Wildhood, the story of an Indigenous Mi'kmaw teenager coming to terms with their identity in Canada. Hong Kong director Wong Kar-Wai’s Happy Together will close out the festival in celebration of the seminal 1997 queer film's 25th anniversary.

Bursic says Halloween 1987 was born out of his work on an upcoming documentary about Jenny Jae Cory, a transgender woman and former mayor of a small Pennsylvania town. While in production, Cory gave Bursic access to her soon-to-be-released memoir, A Path Less Traveled. Bursic was struck by a chapter that told the story of the first time Cory wore women's clothing as part of a Halloween costume in high school in 1987 when she dressed up in her then-girlfriend’s outfit, an important moment in her expression of identity.

“She had a revelation that something was different about her being in public with this outfit and being accepted in this very particular set of circumstances,” Bursic says. “She didn’t have the words for it. But she had this deep, visceral feeling that there was something right about it.”

In a press release, Cory, who will join Bursic and associate producer Madelyn Van
Trieste at the film's premiere event, expresses hope that audiences will "get a glimpse into what a trans person goes through when they're struggling with their gender," adding, "being who you really are is one of the most emotional struggles a trans person may face, but when one does the sky is the limit for one's own self-worth.”

Much of Bursic’s life has centered around cities — he grew up around Pittsburgh and is now based in Los Angeles. However, while working with the Pennsylvania Youth Congress, a non-profit dedicated to LGBTQ youth advocacy, Bursic encountered the stories of queer youth in more remote areas of Pennsylvania. His debut film, The Toothmans, was a short documentary that told the story of a trans teenager’s experience coming out in rural Fulton County, Pa.

“It’s an incredible story of people who live outside cities and don’t have access to artists and filmmakers to help elevate their stories,” Bursic says. “Who is going to tell their stories if not me?”

Several other filmmakers at this year’s ReelQ festival share Pittsburgh roots. Thanks to Her, a queer coming-of-age soccer drama, was directed by University of Pittsburgh graduate Sam McCoy and based on a short film she shot as a student. The feature-length film will debut on Fri., Oct. 7 at ReelQ.

Coming out can be a difficult experience, but for teens living in areas where that kind of expression isn’t even talked about, it can be hard to find the words to describe what you’re feeling. Bursic hopes that his work will help give voice to people who are trying to find theirs.

“It’s this self-coming-out moment that every person in the LGBTQ community has,” Bursic says. “They have to look at themselves and be like, 'There is something different going on here.'”
ReelQ Pittsburgh LGBT Film Festival. Thu., Oct. 6-Sat., Oct. 15. Row House Cinema. 4115 Butler St., Lawrenceville. Virtual screenings also available. Free-$150. reelq.org