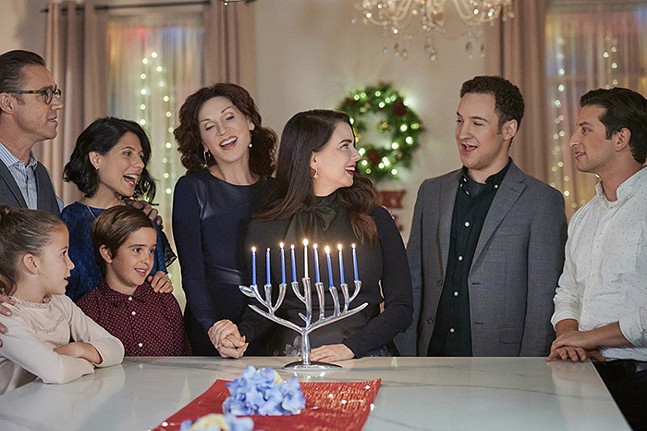 Photo: Crown Media/Farah Nosh
Love, Lights, and Hanukkah!
It's December, and that can only mean one thing: an incessant stream of made-for-TV holiday movies. Last year, Lifetime and Hallmark, the two biggest producers of cheap holiday movies, introduced viewers to the novel concept of Hanukkah movies. You might be wondering 'what's a Hanukkah movie?' And the answer is that it's a movie about Christmas that also has a little Hanukkah involved.

This year's offering, Love, Lights, and Hanukkah!, is an extremely bland, surprisingly sweet film about a woman who takes a DNA test and finds out she's "50% Jewish." Now, she has to learn the overwhelming complexities of Hanukkah (a very simple holiday), in addition to feeding her staggering love of Christmas.

Christina Rossi (Mia Kirshner) is a chef at an Italian restaurant she inherited from her mother, who died the year before. She absolutely loves Christmas, to the point where her house is decorated with a dozen lawn ornaments and multiple Christmas trees. It's her first holiday without her mom, who loved Christmas (people in these movies have always recently lost a relative who loved Christmas). She takes the DNA test to see if she can connect with more family since she was adopted by a single mom.

(Note: while this movie is filmed in Vancouver and set in Cleveland, there is inexplicably a handful of establishing shots in Pittsburgh. The facade they use for the outside of Christina's restaurant is the Downtown Condado.)

As soon as Christina receives the news about her Jewish heritage, she gets a message from a local DNA connection, who wants to meet up. (The concept of a DNA test telling someone they are 50% Jewish is honestly too much to unpack, but just know it's ridiculous.)

Christina meets up with her mystery relative, Becky, who runs a Jewish deli called Lenny's Sports Deli (they do not elaborate on what a "sports deli" is). The two set out to figure out how they might be related, and when Becky brings Christina to meet her mom, Ruth (Marilu Henner), the pieces begin to fall together at a rapid pace, because this is not a movie about adoption or DNA tests. It's a movie about Christmas, and a little bit about Hanukkah, and of course falling in love.

SPOILER (not really): It turns out, Becky is Christina's birth mom! She gave her up for adoption after she got pregnant by some Italian guy years ago! Now Becky has to grapple with suddenly having this whole new, nice Jewish family while still mourning her non-biological mom!

Anyway, her new family includes some dude named David (Ben Savage, aka Cory on Boy Meets World), who is not related by blood but is a family friend who is literally always around. It's clear within the first half-hour that they will end up together, but they have to drag things out for the full length of the movie, which is difficult because they have to fit in everything there is to know about Hanukkah. The Jews in this movie say things like "Hanukkah is my favorite time of year" and show off their collection of ornate dreidels, two things I've never seen anyone say or do in real life.

I noted this last year when I wrote a review of the truly deranged film Mistletoe and Menorahs, in which a Christmas obsessive enlists a "Hanukkah tutor" to impress a client (don't get me started), but the truth is, there is really not that much to know about Hanukkah. You could learn it all within an hour. It's known among Jews as one of the least meaningful Jewish holidays, but popular culture puts more weight on it because it's around the same time as Christmas, and Jewish kids get jealous of Christmas presents.

While Christina and David, a food critic, fall in love, he teaches her the ways of Hanukkah, like what latkes and challah are (you would think a chef would know what these simple foods are, and yet). Kirshner and Savage actually have chemistry, but like the characters in almost every Hallmark movie, they are reduced to the blandest possible version of a person, not even daring to wear patterned clothing. There is also almost no conflict, except for the fact that David is traveling to Europe for six weeks to do research for his book.

Ultimately, Christina learns to love the ways of Hanukkah, embraces her new family, and falls in love. But most importantly, she introduces her new family to her Christmas tradition of hosting a Feast of the Seven Fishes dinner. Even in a movie with "Hanukkah" in the title, the movie ends with everyone celebrating Christmas.