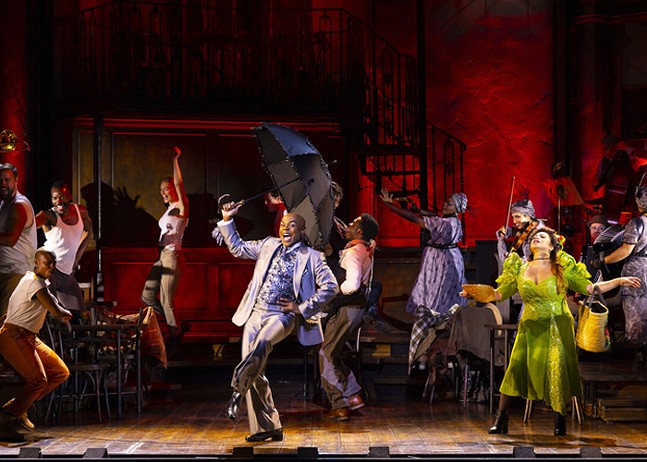 It’s an old tale from way back when. This is according to Hermes, the Greek god of luck and travel who narrates Hadestown, the much-acclaimed musical tragedy playing through Sun., Nov. 20 at the Benedum Center. He speaks to the audience as he assembles a troupe of performers over a propulsive trombone beat.

Hadestown takes the 2,500-year-old ill-fated love story of Orpheus and Eurydice and sets it in a timeless steampunk dystopia ravaged by industrial production (the violent impacts of which literally radiate upwards from Hell) and governed by the gods of Greek mythology in this gorgeous and immersive retelling.

Here, Orpheus (Chibueze Ihuoma), who, by legend, is the most talented bard in the universe, is a shy young musician bussing tables at a stop on the road to Hell. He has discovered a magical old melody he believes he can fashion into a song that will fix what’s wrong with the world. In addition to his divine musical abilities, Orpheus is also touched, Hermes says, by the gift of vision, the ability to see beyond what the world is to glimpse what it could be.

In contrast, Eurydice (Hannah Whitley) is jaded and exhausted by a life of poverty. Whitley’s voice is rich and clear, her performance a poignant expression of anguish. The two fall immediately in love, but still need to eat. Eurydice goes out to scavenge for food and gets caught in a terrible storm, during which Hades (Matthew Patrick Quinn), the king of the Underworld, successfully lures her into his exploitative clutches. When Orpheus learns this, he immediately sets off to accomplish the seemingly impossible task of bringing Eurydice back from hell.

Hades has turned his dark kingdom into an industrial empire with mines, oil rigs, factories, and foundries, which he built to exorcise the loneliness and jealousy he feels during his wife Persephone’s absence for part of every year. The goddess of spring, Persephone (Lana Gordon), splits her time between the Underworld and the world above, and the seasons turn according to her presence or absence.

Although Hadestown takes place in a mythical time and place, the power relations of the story are drawn from our world. The few profit from the stolen labor of the many, and the expansion of industry makes the climate increasingly extreme and inhospitable. The many yearn for freedom, which their overlords tell them will only come through investments in punishing and containing the enemy, poor people.

Hadestown renders these bleak circumstances in vibrant color through Bradley King’s light design, which is visually pleasing and effective, using moving light fixtures to amplify the resonance of the show’s most emotional moments. A turntable center stage facilitates the long journey to hell and back, and a maw-like steel door upstage is the passage to Hadestown, swallowing up all who enter.

The cast performing in Pittsburgh features new principal actors about one month into their time with the touring company, and their performances (as well as those of the rest of the cast) are radiant. Whitley’s haunting turn as Eurydice is a perfect foil to Ihuoma’s soaring optimism as Orpheus, his gorgeous and piercing falsetto a perfect counterpoint to Quinn’s bass (his bio says he “originated several villainous roles for Disney Cruise Line,” which is probably all you need to know there).

This production also features electric performances by Graham as Hermes and Gordon as Persephone. Gordon reprises the role of Persephone for a limited engagement after playing it on Broadway earlier this year and is stunning as the traumatized and conflicted goddess in a peridot green dress. Pittsburgh will be her last stop on the tour.

Graham is magnetic, with perhaps the most expressive face I’ve ever seen in a stage performance. I also could not look away from dance/fight captain Ian Coulter-Buford who leads an exuberant and adaptable chorus.

It’s a tragedy. They say that at the beginning, but it still hits hard at the end. Although it’s wrapped in a beautiful package, Hadestown has a bracing message about what it takes to live in a harsh world that bears quite a resemblance to our own. Despite tremendous fear and pain, the best option is to keep going because you’re likely to regret it more if you turn back.