The script provides plenty of tame treacle and comfortable clichés 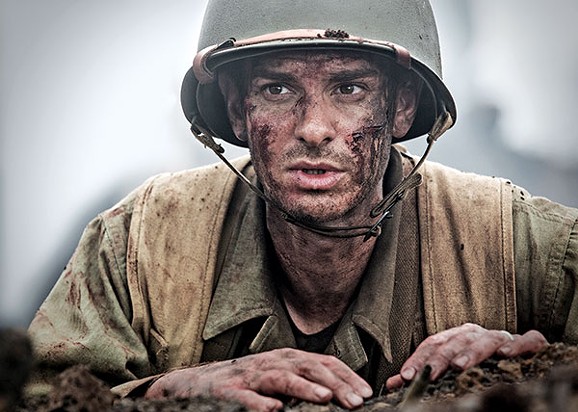 Up to a point, the new film from religious fanatic Mel Gibson, the actor/director once heard spewing angry, drunken, racist and anti-Semitic epithets, is a well-made war movie, even if that isn’t what it aspires to be.

Hacksaw Ridge tells the true story of Desmond Doss (a serviceable Andrew Garfield), the son of an abusive alcoholic father (Hugo Weaving, quite fine) who enlisted in World War II but refused to touch a weapon because of his faith. So he served as a medic, saved 75 men in battle, and became the first conscientious objector to win the Medal of Honor.

After a less-than-credible court-martial sequence, Gibson’s extended battle on Okinawa is a wrenching conflagration of blood, fire and annihilation, just as war should be shown. But the “religious” stuff is ham-handed, as if Gibson wants to justify his own purported faith by comparing it to Doss’ acts of conscience.

The script provides plenty of tame treacle and comfortable clichés (Vince Vaughn is the unit’s Sarge), and the extended climax, while true at its core, is overdone in every way a Hollywood hack job can be. By the end, the movie is more about the heroism of war than its central figure’s pacifism. So I doubt it will buy Gibson many indulgences. Starts Fri., Nov. 4