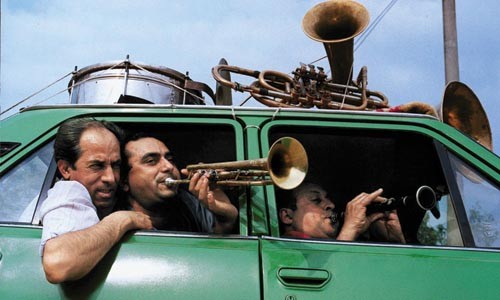 Six weeks, five bands from four countries, 35 musicians, nine languages and one goal: to bring the diversity of Roma -- or gypsy -- music to audiences in the United States. This is the subject of Gypsy Caravan, Jasmine Dellal's film documenting the 2006 tour of the same name.

Traditional music from around the globe is enjoying renewed interest -- whether through an easy click on a Web link, world-music compilations available at chain stores or in some new hybrid form, such as global dance music. Yet most casual listeners will be surprised by Caravan's early revelation: how many musical styles come under the rubric "gypsy music," as embodied by the tour's four acts.

From Spain, there's flamenco music and dance, represented by the Antonio El Pipa Flamenco Ensemble; a brass band Fanfare Ciocarlia hails from Romania, as does Taraf de Haïdouks, a group of violin virtuosos. The "Queen of the Gypsies," the warbling diva Esma Redzepova, is from Macedonia, in the Balkans, and Maharaja is a folk troupe from Northern India.

Toe-tappers, mournful laments, comic narratives, ragas and even a drag act share the stage -- and also common musical roots, the performers argue. It's up to more learned ethno-musicologists than I to make that case; when asked what all this music has in common, one Caravan performer, in halting English, manages, "Language ... rhythm ... feeling."

But Dellal finds some common ground, ironically by breaking away from the group's shared tour bus and taking her cameras to visit the musicians in their hometowns. With few exceptions, the performers have humble backgrounds, marked by hardship and tragedy. (The headliners are middle-aged and up, though younger musicians help fill out the bands.)

And within their life stories are the defining features of the Roma people -- their statelessness and centuries of marginalization, persecution (many Roma perished under Nazism) and continuing discrimination. Even as the performers meet adoring audiences on tour, they recount other episodes of battling the ongoing stereotype that gypsies are shifty itinerant thieves. (Even today you can catch sporadic reports of "gyspy" con artists on the local news.)

Ultimately, the well-intentioned Dellal tries to cover too much ground, which results in truncated performances, repetitive backstage meandering and snippets of ethnic history that can feel disjointed. (The life of a young man in India isn't an easy corollary to the Eastern European who outlived Hitler and the fall of the Iron Curtain.) This doesn't mean Gypsy Caravan isn't an enjoyable two hours, though. And perhaps this fleeting glimpse into a misunderstood culture, with its lively buffet of sights and sounds, will spur a new journey of discovery for viewers. In English, and various languages with subtitles.